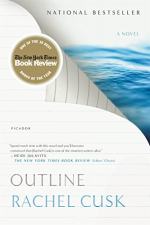 Rachel Cusk
This Study Guide consists of approximately 42 pages of chapter summaries, quotes, character analysis, themes, and more - everything you need to sharpen your knowledge of Outline.

This detailed literature summary also contains Quotes and a Free Quiz on Outline by Rachel Cusk.

Faye, an unhappily divorced mother who has just moved to London with her children, narrates the novel Outline by Rachel Cusk. Faye, a writer, is on her way to Athens, Greece, to participate as an instructor in a summer writing course. Ironically, in life, Faye struggles with separating reality from illusion.

Before going to the airport, Faye attends a meeting at a London club with a man who wants to start a literary magazine. Instead of talking about the new magazine, he tells her about his rise in life, all of the other projects he has completed, and those that he plans to complete. Then, he talks about his family. Faye says that he gives her an outline of his life. The meeting leaves her feeling overwhelmed.

On the plane, Faye sits next to a Greek man. During the flight, he tells her about his childhood and his two failed marriages. As with the billionaire, the narrator does not speak much, but she does challenge his view of his second wife. Also, she corrects his word choice when she deems it appropriate to do so.

The narration continues with Faye having a conversation with a fellow Irish teacher named Ryan. He tells Faye about his childhood in Ireland and the time he spent studying in the United States. Then, he tells about his family. He also talks about the book he published and why he has not been able to repeat the feat. While they are at the cafe, Ryan flirts with the waitress. His actions bother Faye, but he assures her that it is okay. He goes on to tell her about the way his marriage functions and manages to stay alive. While they are talking, the Greek man contacts her to find out whether she would like to go out on his boat. She agrees to meet him, never answering Ryan’s question about what she is working on now.

Out on the boat, she swims, going much further away than the Greek man would like her to go. While they are at sea, they see a family on a neighboring boat. She thinks that their happiness is just an illusion. She goes swimming again, but she stays closer to the boat this time.

Faye meets Paniotis, an old friend, for dinner. Angeliki, a famous feminist writer named friend of Paniotis, will be joining them soon. Before Angeliki arrives, Faye and Paniotis catch up with each other. He tells her that he had felt like a failure the last time he had seen her. Her family was also there and they looked perfect. He had taken a picture of them and he has it with him. She does not want to see it. He goes on to tell her about what he has done since he last saw her, what is is doing now, and his views of marriage. He is also divorced.

When Angeliki arrives, the conversation turns to her travels in Berlin and Poland and the women she met who challenged the idea of the traditional role of women. At the end of the evening, Paniotis give her the photo which is in an envelope and tells her that she should not be afraid to look at it.

On the first day of class, the narrator has the students talk about what they saw on their way to class. During the class, he son calls to say that he is lost. He cannot find his way to school. She gives him directions and continues the class. Everyone participates with the exception of one girl who is silent during the entire class. When she speaks she says that she is going to complain about the class and she calls the narrator a lousy teacher.

The Greek man calls and asks whether she would like to go out on the boat again. She goes and this time he tells her that he is attracted to her and tries to kiss her. She avoids the kiss and tries to let him down gently.

The narrator appears again in the next chapter with Ryan and a friend of hers, Elena. The two of them are going to meet a famous Greek writer, Melete, later. Ryan does not plan to go out with them and leaves to talk to his son when he calls. Before going, he shows them his son’s picture which appears on the phone.

The narrator and Elena go to the restaurant where they are to meet Melete. They have problems getting a table and when they do, Elena is not happy with its location, but when the narrator agrees to sit next to the wall, she agrees to stay. Melete arrives and they talk about the relationship between men and women.

On the last day of class, the students are to write a story that includes an animal. Not everyone completes the assignment because they had all gone out the night before, but those that do share their stories and the students discuss the role of the artist and the role animals play in the lives of humans. Faye gets a call from her loan officer during class telling her that they have denied her request to increase her loan. The news upsets her and her students realize that something is wrong, even though she does not say anything about the call to anyone.

More summaries and resources for teaching or studying Outline.