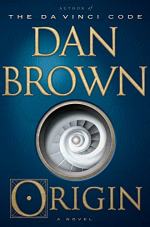 This detailed literature summary also contains Quotes and a Free Quiz on Origin by Dan Brown.

The following version of the novel was used to create this study guide: Brown, Dan. Origin. Doubleday, Oct. 3, 2017. Kindle.

In the novel Origin by Dan Brown, when billionaire researcher Edmond Kirsch is killed it is up to Robert Langdon and Ambra Vidal to honor his memory by making public his findings concerning the origin of human life and its destiny.

Langdon’s adventure began when he was summoned by Kirsch, his friend and former student, to a presentation at the Guggenheim Museum. He met Winston, a docent who communicated with Langdon through a special headset as Langdon toured the museum. Langdon was shocked to learn that Winston was the result of an artificial intelligence program created by Kirsch. Langdon spent a few minutes speaking to his friend before the presentation. Kirsch asked for Langdon’s advice and indicated he feared his life might depend on it. Langdon was unable to speak to his friend again because Kirsch was killed by Navy Admiral Luis Ávila as Kirsch was about to begin his presentation.

After the assassination, Ambra, who was the director of the museum and fiancée of Crown Prince Julían, admitted to Langdon she believed it was her fiancé who had asked to her to include Ávila on the guest list. Fearing for her life, Ambra ran away from the museum and her royal security agents with Langdon. They planned to find Kirsch’s pass code for his computer and launch his presentation so it could be viewed even though he had been killed. They believed it was the best way they could honor his memory.

Ambra and Langdon’s search first took them to Kirsch’s apartment where they did not find the password but learned that Kirsch was dying of cancer. They suspected the password could be found in a book of poetry by William Blake that Kirsch had loaned to the Sagrada Família. Their progress was made difficult by the fact that a news report had been released from the palace stating that Langdon had kidnapped Ambra. When Ambra went onto the roof of the apartment to tell the media the report of the kidnapping was false, both she and Langdon were missed by gunfire. Luckily, they were picked up by a helicopter flown by GR agents who knew the truth about the situation.

When the agents told Ambra they intended to return her to the palace, she refused to go. She ordered the pilot to take her and Langdon to the Sagrada Família. Langdon was impressed that the beefy security men followed Ambra’s commands. At the church, Langdon and Ambra were able to find a line of poetry they believed fit the requirements for Kirsch’s password. While there they came face to face with Ávila, the man who had killed Kirsch. Ávila was killed when he fell down the stairs after losing his balance during combat with Langdon.

From the church, Langdon and Ambra found the defunct church which housed Kirsch’s office and computer. Winston directed them about launching Kirsch’s presentation. He told them he believed that Kirsch would be pleased with the number of viewers they had.

The day after the presentation was launched, Langdon realized Winston’s true role in Kirsch’s murder. It turned out that Kirsch had instructed Winston to do whatever it took to get maximum viewers for his presentation. To that end, Winston had Kirsch murdered, framed Valdespino, and started the conspiracy concerning the Catholic church to draw interest to the presentation. Even though Winston had drawn a good deal of attention to Kirsch’s presentation, he also broke a good number of social mores in the process. As a result, Langdon demanded that the computer that controlled Winston be shut down, an attempt to stop any further harm.