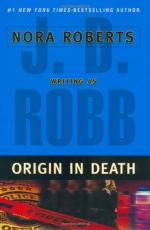 Nora Roberts
This Study Guide consists of approximately 50 pages of chapter summaries, quotes, character analysis, themes, and more - everything you need to sharpen your knowledge of Origin in Death.

This detailed literature summary also contains Topics for Discussion on Origin in Death by Nora Roberts.

Origin in Death by Nora Roberts (writing as J.D.Cobb) is a fictional tale that deals with a very topical subject. Dr. Wilfred Icove Senior is a man of science and medicine. Devastated when his pregnant wife is killed, he continues to raise his son alone while beginning his research into a branch of science that would put an end to such misery and loss forever. Icove, together with another geneticist and scientist - Dr. Jonah Delecourt Wilson — and later with the help of his son, create a medical aberration they refer to as 'Quiet Birth'. This procedure takes all of the guess work and chance out of the genetic soup that is usually the foundation for reproduction and replaces it with a sterile and infallible method of cloning that allows them to make children to order. If a mate is your desire, Icove and Wilson's Academy of horrors can provide one - at substantial cost of course. Beginning with subjects of all kinds, they strive to eliminate all imperfections, and then train and educate their subjects until they are ready for Placement.

Lieutenant Eve Dallas is a detective with the New York Police Department. She is the detective assigned to the case when Icove Senior is murdered in his office. Despite the fact that he is a Nobel prize winner, and beloved by most, it is apparent that someone has a personal issue with Icove from the start. Her investigation leads her to the second murder - Icove Junior, which leads to an investigation of the Academy in which they share involvement. When she arrives to investigate, she discovers another murder. Again, the weapon used is a scalpel plunged into the heart, making it a safe assumption that the same person is responsible for all three. Further investigation reveals the stuff of nightmares. Cloned children - all female and all ages are housed there, and the deeper she digs, the more horrifying the details are. Dallas, having come from a past which had her killing her abusive father to escape, can identify with the mindset of those who felt hopeless, trapped, and wanted nothing more than their freedom. All Dallas has to do now is find the hidden nursery and incubation labs. Finding them is difficult, but discovering the tracking system attached to the newer children enables Dallas and Roarke to track one young girl on a mission to help her mother save the world. In order to stop the experimenting and cloning, Dallas will break all the rules, push herself to the edge of her own sanity and make decisions that she would not have made even a month ago. A well written and frightening look at a possible future for our species.

More summaries and resources for teaching or studying Origin in Death.