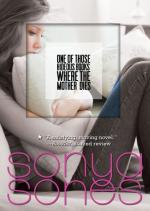 Sonya Sones
This Study Guide consists of approximately 30 pages of chapter summaries, quotes, character analysis, themes, and more - everything you need to sharpen your knowledge of One of Those Hideous Books Where the Mother Dies.

One of Those Hideous Books Where the Mother Dies Summary & Study Guide includes comprehensive information and analysis to help you understand the book. This study guide contains the following sections:

This detailed literature summary also contains Topics for Discussion on One of Those Hideous Books Where the Mother Dies by Sonya Sones.

Fifteen-year-old Ruby Miliken has just lost her mother to cancer and is flying from Boston, Massachusetts, to Hollywood, California to meet her movie star father, Whip Logan, for the first time. Ruby is leaving behind her best friend, Lizzie, and boyfriend, Ray, to live with a man she has never met. She is also leaving behind her mother's sister, Aunt Duffy. Aunt Duffy has taken Ruby to the movies to see her father's films every year since she turned little. Ruby's mother never spoke to Ruby about her father. Everything she knows about him she learned from Aunt Duffy.

Ruby is angry at her father for abandoning her mother before Ruby was born. She resents having to leave her home and live with him. She also feels out of place in the perfect world that her father inhabits. Ruby must learn to make friends and to let go of her old life. She also must learn to make peace with her father. Ruby attends Lakewood high school, were she meets Colette, Wyatt and her dream interpretation teacher Feather. Ruby looks forward to Thanksgiving when her boyfriend, Ray, will come to visit. Ruby meets her father's live-in assistant, Max, and forms a tight relationship with him.

It takes Ruby a while to settle into her new life, come to terms with her mother's death, admit she is depressed, make friends and forgive her father. After being betrayed by her friends back home and experiencing a natural disaster, Ruby and Whip come to understand each other. They have an honest conversation about the past and form a strong bond on which to build the future.

More summaries and resources for teaching or studying One of Those Hideous Books Where the Mother Dies.

One of Those Hideous Books Where the Mother Dies from BookRags. (c)2022 BookRags, Inc. All rights reserved.