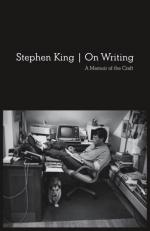 Plot Summary
+Chapters Summary and Analysis
C.V.
What Writing Is
Toolbox
On Writing
On Living: A Postscript
Free Quiz
Characters
Objects/Places
Themes
Style
Quotes
Topics for Discussion
Order our On Writing: A Memoir of the Craft Study Guide

On Writing: A Memoir of the Craft Summary & Study Guide

Stephen King
This Study Guide consists of approximately 30 pages of chapter summaries, quotes, character analysis, themes, and more - everything you need to sharpen your knowledge of On Writing.

On Writing: A Memoir of the Craft Summary & Study Guide Description

On Writing: A Memoir of the Craft Summary & Study Guide includes comprehensive information and analysis to help you understand the book. This study guide contains the following sections:

This detailed literature summary also contains Topics for Discussion and a Free Quiz on On Writing: A Memoir of the Craft by Stephen King.

On Writing is part biography and part how-to. Stephen King writes about his childhood and young adulthood, relating stories that made him the writer he has become. Stephen King then moves into the mechanics of writing, offering advice and insight into a successful career that has worked so well for him but remains distant for thousands of others. On Writing is a poignant, educated, and inspiring book, a book that is sure to help hundreds of struggling writers and motivate still others who picked up the book not for inspiration, but curiosity.

Stephen King was the child of a single mother. Stephen King and his family moved frequently in his early years in order to be closer to family members. Stephen King struggled as a child, missing a whole year of school due to chronic ear and throat problems. When Stephen King was in high school, writing had already become an important outlet for his creativity. Stephen King helped his brother publish a small family newspaper, worked on his school newspaper, and got himself into trouble publishing and selling his own stories. In college, Stephen King continued to send stories to publications, achieving publication on several occasions. At the same time, Stephen King met the woman who would be his wife.

After college, Stephen King had a number of laborious jobs before getting a job as a high school English teacher. While working hard to provide for his family, Stephen King would continue to work on his own stories and novels, a few magazine publications helping to keep his growing family afloat. One day Stephen King got the idea to write a story about a young woman with telepathic ability. However, after writing several pages of this possible novel, Stephen King found that he disliked his main character and did not have the knowledge necessary to make the story believable. Stephen King threw the manuscript away. Stephen King's wife, Tabitha, found the story in the trash and insisted her husband continue writing it. This novel turned into Carrie, Stephen King's first published novel.

Riding on the success of his first published novels, Stephen King threw all his creative energy into writing. Always a heavy drinker, Stephen King soon became an alcoholic, wrongly believing the alcohol helped his writing. Along the way, Stephen King also added cocaine to his addictions. Eventually the situation became so difficult that Tabitha King gave her husband an ultimatum. Soon after, Stephen King became sober and came to a place in his life where he finally understood the priorities in his life.

Stephen King offered a great deal of advice to aspiring writers. Stephen King began with what he called the writer's toolbox and the things it should contain. The most important of these are grammar and vocabulary. Stephen King believed that vocabulary could be as simple as the writer wants, or more complicated if desired. However, Stephen King cautions against actively increasing a writer's vocabulary, claiming that being honest would be better than sounding intelligent. Grammar, Stephen King believed, was much more important to the writer's arsenal. A writer should strive to expand their knowledge of grammar in order to avoid common mistakes that make writing weak. Stephen King advices writers to use active verbs rather than passive, as well as paying attention to paragraph structure and the proper use of fragments and run-on sentences.

Stephen King continued his advice by describing the process in which he uses to write his own novels. Stephen King recommended writing the first draft of a novel all at once, taking no more than three months to write an eighty thousand word novel. Stephen King then recommended putting the finished novel into a drawer for no less than six weeks in order to get some distance. Then Stephen King said to take the novel back out of the drawer, read it through, and make appropriate changes in order to fix narration holes and to emphasize theme and symbolism. At this point Stephen King suggested that a writer give their new work to a number of friends to read, considering their suggestions when doing a final draft.

On Writing: A Memoir of the Craft from BookRags. (c)2022 BookRags, Inc. All rights reserved.