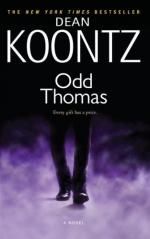 Dean Koontz
This Study Guide consists of approximately 50 pages of chapter summaries, quotes, character analysis, themes, and more - everything you need to sharpen your knowledge of Odd Thomas.

This detailed literature summary also contains Topics for Discussion and a Free Quiz on Odd Thomas by Dean Koontz.

Odd Thomas by Dean Koontz is the story of a young man, who, through circumstances out of his control, finds himself in a position to save the lives of hundreds of his friends and neighbors. Odd Thomas is a fry cook who can see dead people and shadow-like forms he calls bodachs. When Odd sees these bodachs around a stranger, he knows that trouble is coming to his hometown of Pico Mundo, California. Odd feels a sense of responsibility to stop whatever tragic events are about to unfold, so he puts aside personal concerns in order to uncover the coming darkness and stop it. Odd puts himself in danger to save the innocent. Odd never wanted to be a hero, especially not at the high price he is forced to pay. Odd Thomas is a novel that is at once humorous and filled with terror that will leave even readers new to Koontz's unique style begging for more.

Odd Thomas wakes on a normal Tuesday morning ready to enjoy the challenge of making pancakes for the many customers of the Pico Mundo Grille. Odd is sidetracked by Penny Kallisto, a beautiful young girl, who was tragically murdered. Penny wants Odd to stop her killer. Odd communicates with Penny, not through speech, but through some sort of telepathic communication that leaves him aching for the horror young Penny experienced before her death. Odd sees her killer coming his way, a young man his own age with whom he went to school. Odd meets the killer on the street and tells him that he knows about Penny, about the cloth with Penny's blood on it that he keeps in his pocket to remember their time together.

The killer takes off and Odd chases him through his neighbors' backyards until finally the killer breaks into a family home and hides in their child's bedroom. Odd fights with the young man and keeps him restrained until the police arrive. Police chief Wyatt Porter arrives and speaks to Odd, getting the whole story, including Odd's communication with Penny. Porter knows about Odd's strange gift and has often taken his word in order to solve cases he might not otherwise have been able to solve. However, Porter also knows how important it is to Odd that his secret remain a secret, so, like in the other cases, Porter agrees to write his report in such a way as to protect Odd.

Odd goes in to work, late but satisfied with the morning's events. While working the grill at the Pico Mundo Grille, Odd notices a stranger inter the diner. This stranger, a greasy looking guy Odd dubs Fungus Man, has in his company several shadow-like entities that only Odd can see. Odd calls these entities bodachs, using the term that he once heard another young man use. This other young man is the only other person Odd knows could see the bodachs. However, when this young man spoke the bodachs' name, he was killed in a freak accident minutes later. Odd is careful not to let these creatures know he can see them.

Odd watches Fungus Man and his dark companions. Bodachs only appear when something catastrophic is about to happen, so Odd finds himself wondering who this stranger is. Odd borrows his boss's car and finds Fungus Man at the mall where he appears to be on a shopping spree. Later Odd follows Fungus Man to his home. Odd waits for Fungus Man to leave again before he breaks into his house, hoping to uncover some evidence that will tell Odd what the man is planning that has the bodachs interested in him. Odd has never seen so many bodachs concentrated in one place before, not even when an earthquake destroyed a nursing home and killed dozens of its residents.

While in Fungus Man's house, Odd notices that the house is unusually cold despite the lack of air conditioning and the dry heat of the summer afternoon. While checking out the rooms, Odd comes across a bedroom that is strangely dark. Odd enters this room and sees a red light at a distance. Odd walks toward the light, walking much further than seems possible in the small room, until suddenly he finds himself in the living room of the house. Odd returns to the hallway and catches sight of himself entering the black room. It seems Odd has been transported back in time. Odd reenters the room and this time he finds himself outside the house, seemingly thrown forward in time.

Odd reenters the home just in time to see hundreds of bodachs leaving the dark room. Odd watches, beginning to suspect that the black room is some sort of portal between our time and that of the bodachs, or perhaps a portal between their dimension and ours. When all the bodachs are gone, Odd goes back to the black room and discovers it has been returned to a normal bedroom that Fungus Man uses as some sort of office. Odd searches the office and discovers Fungus Man has a fascination with serial and spree killers. Odd also finds evidence that Fungus Man aspires to be a serial or spree killer himself and that whatever he intends to do will begin the following day.

Odd goes to Porter's house and tells him what he has found. Porter recruits one of his men, who happens to be at his house for a barbecue, and together they put together a report on Fungus Man and put out word to their officers to watch out for him. Odd then goes to his friend Ozzie's house where he sees Fungus Man watching the house. Later, when Odd goes to have dinner with his girlfriend, Stormy, he discovers that Fungus Man has followed him there as well. Stormy and Odd run from Fungus Man only to hear him destroying rooms in their wake.

Odd calls Porter to inform him of Fungus Man's antics, then he and Stormy go to the bowling alley. Odd has been having dreams in which he sees employees of the bowling alley dead of gunshot wounds. Odd worries that Fungus Man intends to shoot up the bowling alley and would like to warn the employees, but cannot figure out how to do it without causing a panic. Later, Odd takes Stormy home and then returns home himself, only to discover that Fungus Man is dead and was left in Odd's apartment in an apparent attempt to set him up for murder. Odd takes Fungus Man out of his apartment and hides his body in order to give Odd more time to figure out what Fungus Man was planning. It is clear to Odd that the plan is still in action because bodachs still swarm the town.

Eventually, Odd realizes that Fungus Man had a fascination with Satan and that one of Porter's officers has a tattoo similar to one Fungus Man sported. Odd uses his psychic gifts to find this cop. Odd is directed to the mall, where he follows his instincts and happens upon a masked gunman coming out of a security office. Odd stops this gunman, but knows there are more. Odd goes into the mall, where he finds a gunman shooting randomly at shoppers on the promenade. Despite a dislike for guns, Odd uses one to stop this madman. Moments later, Odd's psychic gifts tell him that the massacre is not over. Odd goes into a loading dock where he finds a truck loaded with enough explosives to take down an entire corner of the three-story mall. Odd manages to disarm the bomb, but not before a third gunman fires several bullets into his back.

Odd is taken to the hospital where he recovers from his injuries. Stormy is at his side the entire time. When he is released from the hospital, Odd hides out in Stormy's apartment with her, trying to avoid the reporters who want an interview with the hero. After a few days, Odd's closest friends come to Stormy's to force him to face reality. Stormy was killed in the shootings at the mall. Odd says goodbye to Stormy and watches as she crosses over to the other side.

More summaries and resources for teaching or studying Odd Thomas.