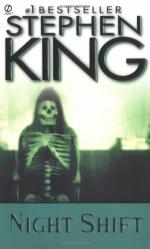 +Chapters Summary and Analysis
Jerusalem's Lot
Graveyard Shift
Night Surf
I Am the Doorway
The Mangler
The Boogeyman
Gray Matter
Battleground
Trucks
Sometimes They Come Back
Strawberry Spring
The Ledge
The Lawnmower Man
Quitters, Inc.
I Know What You Need
Children of the Corn
The Last Rung on the Ladder
The Man Who Love Flowers
One for the Road
The Woman in the Room
Free Quiz
Characters
Objects/Places
Themes
Style
Quotes
Topics for Discussion
Order our Night Shift Study Guide

Stephen King
This Study Guide consists of approximately 46 pages of chapter summaries, quotes, character analysis, themes, and more - everything you need to sharpen your knowledge of Night Shift.

Chapelwaite is the name of the family home Charles Boone comes to live in after his cousin's death.

The Mysteries of the Wormappears in Jerusalem's Lot

The Mysteries of the Worm is a strange book that appears to be a bible for satanic worshipers. This book also appears to have strange powers; therefore, Charles Boone burns it to break the power its followers have over him and his family. However, this does not appear to break the connection, so Charles kills himself to end the cycle.

A6 is the chemical agent that caused a worldwide flu, killing everyone who contracted the disease except for a handful who appear to be immune due to another version of the flu that was not deadly. However, the survivors begin to doubt their immunity when one of their own becomes sick with the...