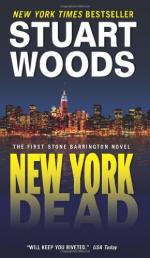 Stuart Woods
This Study Guide consists of approximately 45 pages of chapter summaries, quotes, character analysis, themes, and more - everything you need to sharpen your knowledge of New York Dead.

New York Dead follows the life of J. Stone Barrington, a detective in the New York Police Department, as he investigates the mysterious case of Sasha Nijinsky, a well known broadcaster with the Continental Network. Stone becomes involved by accident, but the case quickly takes over every aspect of Stone's life.

Stone Barrington walks home from a night at Elaine's, the restaurant he frequents. Exercising his knee, which was injured in the line of duty, Stone happens to glance up as the body of Sasha Nijinsky plummets to the ground in front of him. Stone snaps into detective mode, racing to the apartment the woman has fallen from. Stone gives chase to someone fleeing down the stairs, bur re-injures his knee and loses the perpetrator.

Stone calls in his partner, Dino Bacchetti and the two check the apartment, finding a diary that might point toward suicide and little else. Scoop Berman, a freelance television reporter arrives and shows the detectives a video. Sasha had survived her fall. The detectives race to the hospital, encountering a horrific accident scene along the way. The scene is chaos, with Sasha's ambulance and a fire truck. Stone and Dino check the hospitals and the morgue with no luck. Sasha is missing.

Stone and Dino investigate Sasha's life, meeting several key characters along the way. Barron Harkness, Sasha's co-anchor, is a pompous man, one who would have suffered in his career if Sasha had worked by his side. Stone also meets Barron's assistant, Cary Hilliard, a beautiful woman who shares an instant attraction with Stone.

While Stone continues to try and piece together what happened to Sasha, he becomes romantically involved with Cary. The two spend as much time together as possible, and Stone speaks to her about the case, relieved to have someone to share things with as he becomes increasingly shunned in the police department. Stone does not agree with the direction the case is taking and tells his partner and superiors so. The department is desperate to solve the case, or at least get it out of the headlines, and to do so they focus their attention on an innocent woman. Hank Morgan, Sasha's lover, is unable to take the pressure she is under, and kills herself. Though tragic, Morgan's death effectively closes the case for the NYPD.

Stone, forced to retire, supposedly because if his injury, but in reality because he did not agree with his superiors, begins a new life working with the law firm of Woodman and Weld, freelancing for them and establishing his own firm. Stone's relationship with Cary cools off and the two seem to have reached an plateau. Stone works for Woodman and Weld, with his friend Bill Eggers acting as his liason for the firm. Bill requests Stone gather evidence for a client that wants a divorce and Stone does, but the evidence he gets stuns him, as it shows Cary and Barron Harkness engaging in a sexual affair.

Devastated, Stone tries to move on, and the months pass. Despite Stone's best efforts, Cary and the Nijinsky case are never far from his thoughts. Stone is shocked when he receives a note which might be from Sasha. Fingerprints on the note prove to be those of the missing woman. Cary reappears in Stone's life, and despite his wishes to stay away from her, he is unable to do so. When Stone reveals the note to Cary, she informs him that Barron might have something to hide.

Stone focuses his efforts on proving Barron guilty and winning Cary for himself. Stone also receives an invitation from Sasha for a dinner party. Stone calls Dino for help but is rebuffed, so he takes the limo provided to the location of the party alone. Arriving, Stone is hit with a stun gun, but not before he sees Sasha and several others arranged around a table, seemingly enjoying each others company. The only problem with this is that those gathered are all dead, and expertly embalmed.

Stone awakens to find himself naked and being prepared for embalming by Herb Van Fleet. Herb explains that he witnessed Sasha's fall and took her from the scene after the accident involving her ambulance and the fire truck. Herb refuses to tell Stone who he saw on the balcony with Sasha, and Stone is close to being killed when he reveals to Herb that Sasha is actually a man. Stone had learned from Hi Barker, a writer, that Sasha had been born male, but had a sex change at some point in her youth.

Van Fleet reacts strongly and lunges at Stone, but Dino arrives and kills him. Stone and Dino make arrangements to meet the following night on the set of The Hi Barker Show and catch Barron Harkness in his web of lies. Barker presents Harkness with the evidence that Cary has given to Stone, but Barron is able to explain each situation. In desperation, Stone tells Barker to reveal that Sasha is alive and well. Barron seems pleased, but Cary, now his wife, flees. Stone follows Cary to the roof where she confesses that she killed Sasha so that Barron would be free. Stone finally realizes that Cary has been using him all along, first to gather information about what the police knew, then to mislead him with misinformation about Barron. Cary wanted Barron for herself and the only way that could happen is if she got rid of Sasha.

Stone tries to stop Cary from jumping, but the wind is strong and causes him to lose his footing. Cary plummets to her death, a death that she had forced on Sasha at the beginning of the novel. Stone is saved from falling by his partner, Hi Barker and Barron Harkness, the only person present who seems at all concerned that Cary is gone.

Stone moves on, continuing to practice law and rebuild his life. Stone moves on in love as well, accepting a dinner invitation from an attractive judge, effectively ending the chapter of his life that involved Cary and Sasha Nijinsky.