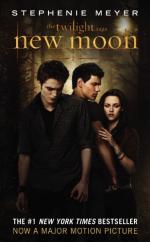 Stephenie Meyer
This Study Guide consists of approximately 60 pages of chapter summaries, quotes, character analysis, themes, and more - everything you need to sharpen your knowledge of New Moon.

This detailed literature summary also contains Topics for Discussion and a Free Quiz on New Moon by Stephenie Meyer.

Isabella Swan was once a sensible, easy-going, rule-abiding teenager who always looked after the happiness and welfare of others, most particularly her divorced parents. Although Bella tends to be a clumsy "danger magnet," she has always put forth great effort to stay below the radar and shy away from the spotlight. When she moved to her father's house in Forks, Washington, (in Stephanie Meyer's first book, "Twilight") Bella had become a reluctant center of attention for her school, her father, and most of all, the beautiful and absolutely perfect Edward Cullen.

The romantic collision between Bella and Edward altered Bella's life for better and for worse. Although Edward Cullen is perfect in every way, he also happens to be a vampire. This means that he is gorgeous, lightning fast, infinitely strong, perpetually young and does not need to eat or sleep. But it also means he is dangerous, especially to Bella, who has an unusually delicious smell to Edward and the other vampires. In the first book, "Twilight," Bella becomes acquainted with the ways of a vampire and just starts to become close to Edward's family.

In this book, however, Bella's birthday celebration becomes nearly fatal when she innocently cuts her finger at the Cullen's house, causing one of Edward's siblings to lose control. With the support of his family, Edward makes the excruciating decision to pack up everything and leave Forks for Bella's own safety. And although her physical being is spared the dangers of the vampire family, Bella's mental state suffers great damage. She has an emotional breakdown. Months pass with Bella going through the motions of being alive, while all the time experiencing nightmares in her sleep and a near-catatonic existence while awake.

After several months, her father, Charlie, threatens to send Bella to live with her mother in Florida. Bella cannot fathom moving away from Forks, still clinging to the hope that Edward might someday come back. So to pacify her father, Bella agrees to spend time out with her friends. While doing this, she discovers that any time she approaches danger, she hallucinates that Edward is there to discourage her, to protect her. Bella becomes addicted to these hallucinations and seeks out the greatest dangers life has to offer, simply to keep Edward with her.

Bella buys a couple motorcycles for her first reckless endeavor. She brings them to an old friend, Jacob Black, who is younger than she, but who also makes Bella feel very safe and secure. As they work on fixing the bikes together, their friendship grows into what is almost a relationship. Just at the peak of this relationship, however, Jacob starts to change in a very strange way. He turns into a werewolf. Unfortunately, werewolves and vampires are natural enemies. While this would not be a problem with the Cullens gone, it becomes a very real dilemma when Edward and Bella reunite. But the war between the vampires and the werewolves is not Bella's only concern. She has a vengeful and deadly vampire woman out to kill her, another vampire family in Italy who wants to eat her, and a strong, stubborn desire to become a vampire herself.

Twilight is a tense, fast-paced, and sometimes sad story of a lovesick teenager caught up in an unusual, yet traumatic world of mythical creatures.

More summaries and resources for teaching or studying New Moon.