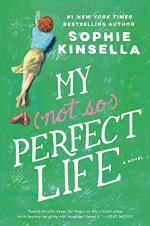 My Not So Perfect Life Summary & Study Guide

Sophie Kinsella
This Study Guide consists of approximately 39 pages of chapter summaries, quotes, character analysis, themes, and more - everything you need to sharpen your knowledge of My Not So Perfect Life.

My Not So Perfect Life Summary & Study Guide Description

My Not So Perfect Life Summary & Study Guide includes comprehensive information and analysis to help you understand the book. This study guide contains the following sections:

This detailed literature summary also contains Quotes and a Free Quiz on My Not So Perfect Life by Sophie Kinsella.

The following version of this book was used to create this study guide: Kinsella, Sophie. My (Not So) Perfect Life. New York: Penguin Random House, 2017. Nook Version.

Cat commutes to work from her small apartment outside of London into the city. The commute takes over an hour and is largely unpleasant, but Cat does not mind because she loves London and she loves the branding agency where she works, Cooper Clemmow, even though she is the lowest person in the building. Her boss, Demeter, is fabulously wealthy and stylish. Cat, who grew up in the country on a dairy farm and had to learn to speak without an accent when she came to London, looks up to Demeter at the same time she fears her.

Demeter asks Cat to come help her with something unusual in her office, and Cat is excited because she thinks that she might have an opportunity to do something more than the usual data work she does all day. But Demeter only wants Cat to dye her roots for her, and when Cat tries to show her some of her designs, Demeter dismisses them and sends Cat outside to intercept Alex, a cute young guy with a tattoo on his wrist in his thirties who turns out to be Alex Astalis, the son of the agency’s owner. Cat and Alex go up to the rooftop and flirt with one another and then Alex emails Cat and asks her to lunch the next day.

Cat goes home after work and finds that her flatmate has filled up the flat with boxes of whey. Cat goes on to Instagram and pretends that she has had a lovely evening hanging out with her roommates, even though this is not true. Cat goes out to lunch with Alex the next day at a Christmas Cheer pop-up, but it turns out they are working on rebranding the place. Still, Cat senses some chemistry with Alex. The next day, Cat meets a teenage girl who tells her about a community center in danger of closing. Cat brings this up to Alex the next day at work, and then the two of them spontaneously join a Santa-hat bike parade on the London streets. The next day, Cat goes out with Rosa and tells her that she likes a handsome dark-haired man with a tattoo. Then she discovers that Alex and Demeter are in a relationship. Cat pretends to be sick so that she can escape having to pay for an expensive meal, and then is humiliated when a woman mistakes her for a homeless person in need of charity.

Cat goes to the office Christmas party. Rosa sees Alex’s tattoo and drunkenly tells him that Cat loves him. Cat leaves the party and goes home for the holiday break. Her father and his partner Biddy tell her that they are turning the farm into a glamping site, and Cat agrees to do the marketing. Cat goes back to London and tries to impress Demeter with the pamphlet she designed for the glamping site, but Demeter fires her instead. Cat agrees to go back home to help with the incoming customers, but decides not to tell her father and Biddy the truth about her job.

Three months later, Cat is still at home with her father and Biddy, who think she is on a sabbatical, helping to run the glamping site, which is becoming incredibly successful. One day, Demeter shows up as a guest. Cat has changed her appearance, and Demeter does not recognize her. Cat decides to torture her boss for revenge. Cat starts to feel bad for messing with Demeter, but then she finds out that Alex is coming to stay and she thinks that Demeter has invited him because they are lovers. Cat redoubles her efforts and both she and Demeter end up in a muddy swamp where the whole truth comes out. Demeter apologizes for firing Cat and confesses that Alex is not her lover and says he is probably coming to fire her. Cat hides Demeter and goes to find Alex to figure out why he is there for Demeter. Alex tells Cat he is there to fire Demeter because she forgot to follow up with a client. Cat runs and tells this to Demeter, who heads home to London to try and find proof that she did not forget to follow up and that her secretary Sarah has framed her.

Alex and Cat spend the day together in a meadow. Demeter comes back to the farm and tries to explain the situation to Alex, but he does not believe her and tries to fire her. Demeter accidentally reveals the truth about Cat getting fired to her father, and Cat must come clean. Her father and Biddy are understanding and loving, and Cat feels like a fool for lying to them. Alex agrees to give Demeter an extra day before he fires her, and Cat goes into the office to try and find proof. When she finds the office empty, she goes to the bar and gets Sarah, Flora, and Rosa to confess to messing with Demeter’s emails and calendar on tape. She shows the tape to her boss and Demeter gets to keep her job. Cat gets hired to be the new creative director and she gets to work as Demeter’s partner. Alex moves to New York because he wants to be close to his dad, but then comes back because he realizes all he wants is Cat because he loves her.

More summaries and resources for teaching or studying My Not So Perfect Life.

My Not So Perfect Life from BookRags. (c)2022 BookRags, Inc. All rights reserved.