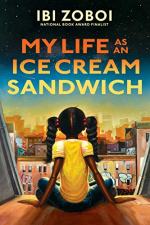 My Life as an Ice Cream Sandwich Summary & Study Guide

Ibi Zoboi
This Study Guide consists of approximately 38 pages of chapter summaries, quotes, character analysis, themes, and more - everything you need to sharpen your knowledge of My Life as an Ice Cream Sandwich.

My Life as an Ice Cream Sandwich Summary & Study Guide includes comprehensive information and analysis to help you understand the book. This study guide contains the following sections:

This detailed literature summary also contains Quotes and a Free Quiz on My Life as an Ice Cream Sandwich by Ibi Zoboi.

This study guide was created using the following version of this book: Zoboi, Ibi. My Life as an Ice Cream Sandwich. Puffin Books, 2019.

My Life as an Ice Cream Sandwich tells the story of Ebony-Grace Norfleet Freeman, an imaginative young girl moving from her home in Huntsville, Alabama to Harlem, New York. Ebony possesses an overactive imagination and wants to be the first child in space. She is close to her grandfather, an engineer at NASA. Ebony’s grandfather encourages Ebony’s flights of fancy to her “imagination location” (4).

Ebony travels by herself to Harlem for what she believes is a one-week visit with her father. Ebony tolerates the trip, but longs to return to Huntsville. Ebony struggles to fit in with the other kids in the neighborhood, including Bianca, a girl Ebony knows from previous trips to Harlem.

In comparison to other girls her age, Ebony seems young and her eccentricities make it challenging for Ebony to make real friends. Ebony tries to get Bianca to play games of make believe like they did when they were younger, but Bianca prefers to spend time jumping rope and making up rhymes.

Bianco introduces Ebony to her friends, but Ebony does not know how to fit in with the rest of the girls. The girls have formed their own crew called the Nine Flavas, where all the girls are named after ice cream flavors. The girls mock Ebony for being different, not knowing how to Double Dutch, dance, or make rhymes. Ebony wants to be accepted for who she is, but it seems Ebony will have to adapt.

Ebony meets Pablo, a young rapper who shares Ebony’s appreciation for science fiction. Ebony is able to see that someone like her can fit into this other world. With Ebony’s stay in Harlem looking more and more permanent, Ebony realizes that she needs to find her own place while being true to herself.

During a rap/dance battle at the junkyard, where Ebony’s dad is the DJ, Ebony stands up for the Nine Flavas in an unexpected way. The other girls begin to see that there is a place for Ebony, even if it is not as a dancer or in Double Dutch. Ebony’s friendship with Pablo also helps Ebony connect to the other girls.

More summaries and resources for teaching or studying My Life as an Ice Cream Sandwich.

My Life as an Ice Cream Sandwich from BookRags. (c)2022 BookRags, Inc. All rights reserved.