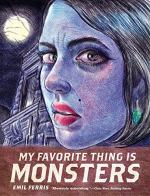 Ferris, Emil
This Study Guide consists of approximately 65 pages of chapter summaries, quotes, character analysis, themes, and more - everything you need to sharpen your knowledge of My Favorite Thing Is Monsters.

My Favorite Thing Is Monsters Summary & Study Guide includes comprehensive information and analysis to help you understand the book. This study guide contains the following sections:

This detailed literature summary also contains Quotes and a Free Quiz on My Favorite Thing Is Monsters by Ferris, Emil .

The following version of the book was used to create this guide: Ferris, Emil. My Favorite Thing is Monsters. Seattle: Fantagraphics, 2016.

My Favorite Thing is Monsters is a graphic novel set in Chicago in 1968. The entirety of the novel is presented in the form of the illustrated journal of the protagonist, Karen. Karen is a very talented artist and her drawings of the events around her are quite detailed. The most salient detail regarding her illustrations is that she draws herself as a werewolf-like monster rather than what she actually looks like. Karen is in middle school and has an obsession with all things related to the horror genre, particularly monsters. Karen’s love of horror and monsters makes her the subject of ridicule from many of the children at her Catholic school, including her former best friend Missy. Karen lives in a small basement apartment with her mother (referred to as Mama) and her brother Diego (referred to as Deeze). Their neighbors include Mr. Chugg who is an anti-social ventriloquist, the Gronans who are the landlords and local gangsters, and the Silverbergs who are an old Jewish couple. One day when coming home from school Karen learns that Mrs. Anka Silverberg was found dead in her apartment. The death is viewed as a suicide by the police, by Mama is not so sure. Karen had a very friendly relationship with Anka so she decides to become a detective to solve the mystery of her murder.

Karen is extremely close with her brother, Deeze. Deeze is a very talented artist who is covered in tattoos. Starting when she was very young, Deeze would regularly take Karen to the Art Institute of Chicago. This instilled in Karen a love of art, both in admiration and practice. While contemplating Anka’s murder, Karen remembers a night when she and Mama found Anka naked on the sidewalk in front of their building. She has black spots on her back and Karen puts together the black spots are from Deeze, whose fingers are perpetually stained with black ink. She admits that Deeze has a very bad temper which he struggles to control but does not think he would be capable of killing Anka.

While continuing her investigation, Karen meets a new girl in the neighborhood named Sandy. She is unhealthily skinny and clearly malnourished. They spend some time together and Karen invites her over to her house but Sandy suddenly leaves. When Karen arrives home she finds her mother and Deeze fighting. Mama reveals she is dying of breast cancer, causing Karen to become sad and then angry. The next day, Karen walks around her neighborhood in despair over the bad news about her mother. She sees some hippies who irritate her. The hippies tell her to mellow out and give her a pot brownie. Karen, not knowing what it is, eats the brownie and then walks to a nearby cemetery. While there she is greeted by the ghost of Kitty Warn, the real-life first female detective in the United States. Kitty give Karen some advice on how to proceed in her investigation and then leaves her. When Karen returns to her apartment she sees Mr. Silverberg aggressively arguing with an unknown woman. The woman calls Anka a monster and Mr. Silverberg tries to choke her. Karen jumps in to startle Mr. Silverberg and the woman gets away. Mr. Silverberg, looking haggard, drunk, and depressed thanks Karen for intervening and invites her in for a visit. He presses play on a tape recording of Anka’s voice. It is an interview about her past she had done a few years before.

The story narrative shifts to Anka’s story. She was born in Berlin in 1920. When she was young, she and her mother were taken in by a Madam of a local brothel. Anka was raised at the brothel while her mother worked as a prostitute. Anka was taken under the tutelage of Sonja, the brothel cook, who would tell her fairy tales and Greek myths to provide her with an escape from her harsh surroundings. Eventually, Sonja is killed by Anka’s mother out of jealousy and Anka is sold into sexual slavery. While working as an underage prostitute, one of her clients is an old man named Herr Schutz who shows her considerable kindness but still rapes her. Anka is then sold to an unknown person who lives in a gothic abbey outside of Berlin. There she is almost the victim of some kind of ritual sacrifice. Anka barely escapes and goes to Herr Schutz, having nowhere else to go. Herr Schutz allows her to stay and years later gives her money to start her own life. She is soon apprehended by Nazis and forced to register as a Jew. She is then captured and sent to a concentration camp. This is when the tape recording stops. Karen searches the Silverberg’s apartment for the rest of the taped interview and steals them while Mr. Silverberg is passed out drunk.

The next morning, Karen sees Mr. Gronan, a local gangster and their landlord, about to be hauled off the jail. Mr. Gronan tells Karen to keep an eye on his wife and that he will be calling Karen to find out if anyone visits his apartment while he’s gone. Karen then walks to school and is apprehended by a group of her usual bullies. This time they are particularly aggressive and attempt to rape her. She is saved by her classmate, Franklin, who is similarly ostracized by their class. They decide to skip school for the day and are joined by Sandy. The three of them go to the art museum so Karen can show her new friends the things she loves most. While heading home after the museum, they hear the news that Dr. Martin Luther King, Jr. has been shot.

When Karen returns home, Mama and Deeze are furious that she skipped school. Mama orders Deeze to spank Karen with a belt, but he only pretends to (a trick they have been pulling for years). During the charade, Deeze breaks down crying and reveals he shot someone, but says it was not Anka. He also reveals he and Anka had an affair when he was just 16 and that Mrs. Gronan is blackmailing him for unknown reasons to have sex with her.

The next morning after Deeze and Mama leave for the day, Mrs. Gronan knocks on the door looking for Deeze. She leaves and immediately the phone rings. Mr. Gronan had someone watching the building and he demands to know why his wife was at Karen’s door. Karen lies and says she was just returning wrongly delivered mail, which relieves Mr. Gronan. Karen’s former friend Missy arrives soon after and attempts to make amends with Karen by inviting her to her birthday party. Missy apologizes for being to mean to Karen and tearfully says she buckled under pressure from the other kids at school and her mother (who did not what Missy to be friends with Karen). Karen then lays on her bed and continues to listen to Anka’s taped interview.

The narrative then shifts to Anka’s story where she just arrived by train at a concentration camp. At first, Anka and the other prisoners are unsure what will happen to them. Anka quickly figures out they are all in grave danger. Anka uses a letter she carries from Herr Schutz (an important German aristocrat) as leverage to get released. She also convinces Herr Schutz to allow her to save six other people under the guise of starting new brothel.

Karen’s listening is interrupted suddenly by Deeze. He takes her to Missy’s birthday party. There, Karen is teased by the other children as well as by some of the adults. Missy takes Karen to a stairwell in the back of the apartment so they can hug and be together without the others. Karen does not say it explicitly, but it is intimated that she is in love with Missy.

After the birthday party, Deeze tells Karen she is suspended from school for the rest of the year because she skipped the other day. Karen did not believe this to be the reason and presses Deeze. He eventually admits it is because Mama is close to dying and the school wants Karen to be able to spend more time with her. Karen asks Deeze about his admission of shooting someone but he refuses to answer. On the walk home, Karen and Deeze’s conversation continues and Deeze forces Karen to consider who she really is. Karen admits to Deeze she is homosexual, which Deeze assures does not make him love her any less but to nevertheless be careful about who she tells about it.

The next evening while walking outside Karen spots the man that Mr. Gronan is having watch the building. Karen goes to confront him and he turns out to be rather friendly. The man (named Sally) says he has been watching the apartment for Mr. Gronan for a long time. He accidentally reveals that Deeze killed someone named Victor but does not elaborate on who that is. When Karen returns home, she is about to confront Deeze about this information, but Deeze says Mama is close to dying. She dies quietly and peacefully. Unable to deal with his grief, Deeze begins to drink heavily.

Karen finds a bloodied fabric flower (now dried up) amongst Mama’s belongings and confronts Deeze about who is belongs to. Deeze screams that it belongs to someone Mama loved very much who Deeze had killed. He storms off before he reveals any more information. The next day Karen attends Mama’s funeral. After the funeral, Deeze tearfully approaches a headstone marked “Josie” but tells Mrs. Gronan that it belongs to Victor, whom Deeze describes as his victim. After the funeral, Karen retreats to her room and falls asleep. She has a dream where she faces many of her darkest emotions and urges. She sees the ghost of Anka who urges her to continue her investigation. Karen eventually retreats to Green Island, an imaginary place where Karen goes when she is scared and needs to feel safe. There, she sees someone she thinks is Deeze. It is not Deeze, though it looks like him. He claims to be her brother, Victor.

More summaries and resources for teaching or studying My Favorite Thing Is Monsters.

My Favorite Thing Is Monsters from BookRags. (c)2022 BookRags, Inc. All rights reserved.