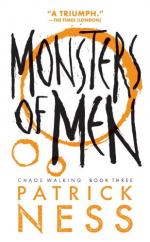 Plot Summary
+Chapters Summary and Analysis
It Begins: Two Battles - And a Third
Second Chances: The Calm - The Storm
Control Yerself: Down in the Valley
Control Yerself: Closing In
Alliance: Speaking With the Enemy
Alliance: The Peace Process
The Envoy: The Delegation
Life During Peacetime: The Days of Glory
Life During Peacetime: Separations
The End of New World: The Final Battle
The End of New World: The Future of the World - Arrival
Free Quiz
Characters
Symbols and Symbolism
Settings
Themes and Motifs
Styles
Quotes
Order our Monster of Men Study Guide

Patrick Ness
This Study Guide consists of approximately 80 pages of chapter summaries, quotes, character analysis, themes, and more - everything you need to sharpen your knowledge of Monster of Men.

This detailed literature summary also contains Quotes and a Free Quiz on Monster of Men by Patrick Ness.

The following version of the novel was used to create this study guide: Ness, Patrick. Monsters of Men. Candlewick, October 18, 2010. Kindle.

With more than 5,000 new settlers expected to arrive on the New World in just weeks, the fight is on to secure peace and overthrow two conflicting dictators in the novel Monsters of Men by Patrick Ness, the final installment of the Walking Chaos series. To make matters worse, the Spackle, the indigenous species have declared war on the humans. One of these Spackle in particular has a personal vendetta against Todd Hewitt, one of the young heroes trying to bring peace to the country. Viola Eades, another hero instrumental in campaigning for peace, suffers from a fatal sickness caused by the identification bands all women were ordered to get by Mayor David Prentiss, tyrannical leader of New Prentissville.

This novel opens with the Spackle attacking the Mayor and his army. A scout ship sent by settlers hoping to live on the New World has just landed nearby. While Todd stays with the Mayor in battle, Viola rides to the scout ship but does not manage to get there before Mistress Coyle, an equally tyrannical leader, arrives. The scouts, Bradley and Simone, know Viola and trust her opinion over that of Mistress Coyle. They watch the battle below and debate whether or not they should get involved in the war by shooting the scout ship’s missiles at the Spackle. Simone and Bradley turn to Viola for advice on what they should do. Viola decides to fire the missile herself because she believes Todd has been killed by the Spackle. She feels immediately responsible for the way she has added to the violence and death involved with the war.

Through the course of the war, Mistress Coyle, the leader of the faction known as the Answer, and the Mayor fight against each other in their attempt to be able to claim they were the one was responsible for ending the war. After she felt she was losing the support of the people, Mistress Coyle wore a bomb to a public speech that she and the Mayor would be giving. Mistress Coyle was desperate enough to keep the Mayor from being the people’s chosen leader that she was willing to kill herself in the hopes that she would kill him as well. The Mayor desperately wants to overcome the Spackle by force. Even after a tentative peace has been declared, the Mayor steals the scout ship, kidnaps Todd and attempts to bomb the Spackle.

In the final scene of the novel the Mayor takes Todd in the scout ship to the ocean. They face off alone on the beach, fighting only with the power of their Noise. Viola arrives in time to help Todd fight against the Mayor. Together, they are able to defeat the Mayor. Surprisingly, instead of allowing Todd to force him to his death in the ocean where creatures wait to eat the Mayor, the Mayor willingly walks into the water. He tells Todd that he wants to give him the gift of not having to kill him.

Just when it appears Todd and Viola have secured the peace for which they worked so hard, the Return appears on the beach and shoots Todd, believing that he is the Mayor. Viola wants to kill the Return but Ben convinces her she would just start the fighting all over again. As Ben holds the body of his son, he realizes that he can still hear Todd’s voice, a sign that Todd is still alive.

More summaries and resources for teaching or studying Monster of Men.