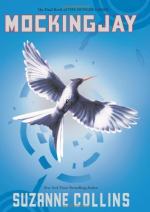 This detailed literature summary also contains Topics for Discussion and a Free Quiz on Mockingjay by Suzanne Collins.

Mockingjay by Suzanne Collins is the third book in the Hunger Games trilogy.

As with the first two books in the series, Katniss Everdeen, hero of the Hunger Games trilogy, is the protagonist of the story. Katniss is 17 years old, a talented hunter and reluctant symbol of the revolution between the Districts and the Capitol.

There are two main entities in the story - the Districts and the Capitol. There are thirteen districts, each of which has its own distinct purpose and personality. In the beginning of the story, District 12, home to heroes Katniss, Gale and Peeta, has been destroyed by fire. The remaining citizens, of which there are no more than 800 or 10% of the population, are taken to District 13 where they will live as refugees. District 13's people are accommodating, yet its utilitarian and overly controlled atmosphere makes it very difficult for the refugees to adapt.

The two locations are split between the Peacekeepers and the Rebels. The Peacekeepers work for President Snow and will do anything to protect the Capitol, its people and its policies. Actually, people are often expendable in the Capitol as long as the infrastructure stands. The hub of President Snow's world is located inside his mansion in Capitol City. Snow's direct adversary is President Coin of District 13. Although Snow is painted as the symbol of evil, Coin is very much like her opponent.

From the beginning of the story, it becomes clear that Katniss Everdeen is destined to be the Mockingjay. Katniss, two time survivor of the Hunger Games, has no desire to become the Mockingjay until she realizes that it is the only way she can ensure the safety of her loved ones and allies. It will also give her the opportunity to kill President Snow.

Gale, Katniss' best friend and spurned love, is beside the Mockingjay's side through it all. Katniss and Gale have been friends and hunting partners for five years and are so close that they need not use words to communicate.

The relationship between Peeta and Katniss remains an issue. President Snow and President Coin both use Peeta to get to Katniss and the plan nearly succeeds. Peeta is hijacked by using neurological venom and it almost ruins the victor and Katniss' love.

Katniss remains almost impossible to control which is both a blessing and a curse. Although Katniss often gets hurt, this shows that she has a mind of her own and therefore is able to succeed when others would surely fail.

The battle between the rebels and the Peacekeepers comes to a head when the rebels infiltrate the Capitol City. Through the chaos it is difficult to tell which side is winning since there are explosions, gunfire from every direction and people dying in the street. In the end, it is the rebel cause that has taken down the Capitol. Katniss is once again an unwitting hero.

After Presidents Snow and Coin are killed, Katniss and Peeta are sent back to District 12 where they will succeed in rebuilding their lives. Katniss may continue to survive and find some measure of happiness but there will always be an underlying fear of the Hunger Games.