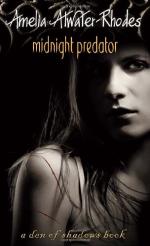 Amelia Atwater-Rhodes
This Study Guide consists of approximately 51 pages of chapter summaries, quotes, character analysis, themes, and more - everything you need to sharpen your knowledge of Midnight Predator.

Midnight Predator by Amelia Atwater-Rhodes is a vampire novel about a young woman whose family was killed by a vampire so he could force her to become his slave. After escaping from Lord Daryl, Turquoise becomes a hunter, willing to kill any vampire for the right price. When she is hired to kill Jeshickah, she must enter Midnight as a human slave in order to gain access to the cruel vampire, but her experiences in Midnight and after her escape make her question her future as a hunter. Midnight Predator is an engaging story of a woman learning who she is, who she was, and who she wants to become.

When Turquoise and Ravyn tie in their fight to become the leader of Crimson, a rematch is scheduled in a month. They are both hired by Jillian Red for an anonymous employer to kill the vampire Jeshickah before she resumes control of Midnight where the focus is on the trade of human slaves. Nathaniel sells Turquoise and Ravyn into Midnight as slaves. Turquoise is surprised when she discovers the kindness of Jaguar, the current master of Midnight, and Ravyn makes a deal with Gabriel which allows her to acquire two knives. Meanwhile, Daryl, Turquoise's first owner who killed her family in order to enslave her, tries to fight Jaguar for ownership of Turquoise.

Jaguar prevents Jeshickah's death because he does not want to see Turquoise tortured to death by Jeshickah's friends in retribution for the powerful vampire's demise. When Ravyn and Turquoise are revealed to be hunters after they attempt to kill Jeshickah, Jaguar sells Ravyn to Gabriel and helps Turquoise escape with Eric so Jeshickah cannot use the boy to hurt Jaguar. Nathaniel hides Turquoise and Eric in one of his houses, but when Turquoise runs into Greg, a boyfriend from her past as Catherine before her introduction into the world of vampires, she begins questioning her old dreams and her future as a hunter. Jaguar helps Turquoise train for the Challenge because Gabriel purchased her as well and struck a deal with Ravyn to grant freeblood status to the winner of the Challenge; this status will allow Turquoise to kill Daryl without facing consequences. Turquoise wins the Challenge, but she relinquishes her title as the leader of Crimson to Ravyn. She returns to Nathaniel's home to find it was burned down. After ensuring that Eric is safe, she returns to Midnight where she confronts and kills Daryl. Turquoise begins looking forward to her future where she now has the option of living in the vampire world or the human world. She is happy that her future now holds choices and freedom to make her own decisions.

More summaries and resources for teaching or studying Midnight Predator.