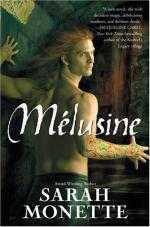 Mélusine is a fantastical city full of old magic, legends, thieves, and corruption. Felix Harrowgate is a powerful wizard of the Mirador, a citadel of political and magical power in Mélusine. The child of a prostitute and sold to a keeper by his mother for reasons not explained in the book, Felix was used as a prostitute until the evil wizard Malkar bought him from his pimp/keeper. Malkar is cruel and seductive. He controls Felix for six years, until Felix enters the Mirador as an apprentice wizard. Felix is naturally gifted and with the education he received from Malkar, quickly rises to prominence. He becomes lovers with Shannon, the protectorate's brother. When the truth about his past as a prostitute comes out, Felix loses his position and finds himself under the control of Malkar once again. Malkar's power over Felix is a result of years of abuse and manipulation. Knowing that his own magic is not strong enough, Malkar performs a spell that makes Felix a conduit of power under Malkar's control. Malkar binds Felix in madness and silence, and then uses him to break the Virtu, the magical center of power in the Mirador. Accused of the destruction of the Virtu, Felix is caught and imprisoned in an insane asylum. Eventually rescued by other wizards who realize what Malkar had done to Felix, Felix is still trapped in the spell of madness cast on him by Malkar. He sees strange visions and is overwhelmed by a black insanity whenever he is in the proximity of magic. Acting through Felix, Malkar manages to set the Mirador on fire, breaking its ancient enchantments, which bind the city together under a deep spell.

Meanwhile, the cat burglar Mildmay the Fox has a similar upbringing to Felix. His mother was also a prostitute and he was raised as a kept thief, a child that thieves for a Keeper. Felix falls in love with a young woman while doing a burglary job for her. The two of them get involved in some dark magic, but manage to escape. When the Mirador burns, Mildmay's lover leaves him and is murdered. Fate brings Mildmay to a foreign wizard from a different order, Mavortian Von Heber, who believes that Mildmay is the secret to finding Felix Harrowgate.

The increasingly disturbed Felix and Mildmay cross paths in the town of Hermione, where an ancient fantom is controlling a disused wizarding tower. Recognizing each other's strange features, red hair, and golden eyes, and realizing that their mothers have the same name, Felix and Mildmay realize that they are brothers. Felix saves Mildmay from a curse that would have killed him. Mildmay realizes that Felix is crazy and frightened and feels bound to protect him. In a dream Felix meets a Sunling, one of the people of Troia, who are wise in healing. Felix and Mildmay set out to find the Sunlings in hopes that they will be able to cure Felix of the damage that Malkar did to his mind. They begin their journey along with Von Heber, Heber's bodyguard and the wizard Gideon. However, Mildmay and Felix end up on their own, travelling across the empire to reach the land of Troia. The wizards manage to cure Felix. Restored to his magical power and sanity, Felix's gratitude towards Mildmay makes him realize that there is finally someone in his life that he can trust.