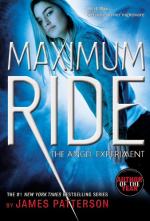 James Patterson
This Study Guide consists of approximately 34 pages of chapter summaries, quotes, character analysis, themes, and more - everything you need to sharpen your knowledge of Maximum Ride.

The Prologue to James Patterson's Maximum Ride: The Angel Experiment opens with the following line: "Congratulations. The fact that you're reading this means you've taken one giant step closer to surviving till your next birthday." Prologue, p. 1

There is an immediate urgency in the tone of the narrator, begging the reader not to put the book down because to do so could result in dire consequences.

The Prologue gives instantaneous insight into the mind of a scared teenager who is literally fighting for her life. The majority of the story is told by Max, a fourteen year old girl who was created at a school designed to create hybrid human beings. Max, along with her adopted family of other genetically altered beings, is 98% human, 2% bird.

"The six of us—me, Fang, Iggy, Nudge, the Gasman, and Angel—were made on purpose, by the sickest, most horrible 'scientists' you could possibly imagine." Prologue, p. 1

According to Max, the 2% bird DNA has made a huge difference in each kid. Each kid knows how to fly and has many characteristics of a bird including a rapid heart rate, thin bones, and a voracious appetite. The children also have superhuman strength and vision in addition to a variety of supernatural gifts that are discovered throughout the story.

The six children, whose ages range from fourteen to six years old, have escaped from the school. In addition to their creation, the scientists have also created another group of hybrids known as the Erasers - part human, part wolf. The Erasers work as security guards for the school and can morph into wolves in the blink of an eye. It is Max's goal to tell the children's story.

Four years ago, a scientist at the School helped the six kids to escape. This scientist, Jeb, had taught the kids how to live "normal" lives. The kids learned to read, fight, and live in the real world as much as possible. Two years previous, Jeb had disappeared leaving the kids alone.

The action begins with the kidnapping of six year old Angel. The Erasers take Angel back to the school for testing. Angel sees Jeb and is confused about why he would want to hurt her if he was truly her friend.

The other kids hatch a plan to get Angel back from the School. Erasers are everywhere and it is an uphill battle. Max gets hurt saving a girl from bullies. The caper is finally pulled off and Angel is rescued.

The kids go to New York to get information on their histories and families, if they do exist. The battle against the Erasers gets much more difficult. In addition, Jeb and his son, Ari, are on their trail. The kids eventually get the information they want and fly off to find their families.

The beginning and end of the book both contain passages from Max, warning the reader about the plight of the Flock and how the story may seem fantastic and unbelievable but that it is entirely true. The structure is also designed to create a compelling cliffhanger for the reader coaxing the reader to move on to the next book in the series.

More summaries and resources for teaching or studying Maximum Ride: The Angel Experiment.