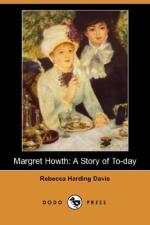 Introduction & Overview of Margret Howth: A Story of To-Day

This detailed literature summary also contains Bibliography and a Free Quiz on Margret Howth: A Story of To-Day by Rebecca Harding Davis.

Margret Howth: A Story of To-Day, published in 1862 in Boston, was Rebecca Harding Davis's second widely acknowledged work, and her first novel. Set in an Indiana mill town during the fall and winter of 1860, it depicts the suffering of the working poor at a time when industrialization was growing across America.

During the time Davis wrote, the society she lived in was divided into areas of activity that were considered appropriate for men, or for women. Women were expected to take care of home and family; men were expected to attend to the world of ideas, politics, and money. Writing books was considered to be a male activity, and women who wanted to be authors, like Davis, were expected to write "moral" fiction: fiction that educated, elevated, and promoted religious values.

However, some writers, such as Davis, preferred to present uncouth, sinful, or "low" characters, who were generally ordinary, poor, and flawed people. This realistic fiction was intended to be the opposite of popular nineteenth-century fiction, which presented strong heroes, beautiful heroines, and romantic plots. Davis managed to fit her depiction of unattractive, sinful, and flawed people within the social ideal that women write moral fiction by using her stories to examine social and religious issuesand to bring up moral questions. She writes at the beginning of the book:

"You want something . . . to lift you out of this
crowded, tobacco-stained commonplace, to kindle
and chafe and glow in you. I want you to dig into
this commonplace, this vulgar American life, and see
what is in it. Sometimes I think it has a new and awful
significance that we do not see."

Margret Howth was first published in six installments in the Atlantic Monthly beginning in October, 1861. At the request of her editor, James Fields, Davis rewrote the novel to make the ending happier. Although she was disappointed with the necessity of doing this to make the book more agreeable to the public, she had faith that Fields was probably right.

According to Jane Atteridge Rose in Rebecca Harding Davis, the book has been called "the earliest realistic depiction of an American woman as an individual and as ordinary." Jean Fagan Yellin, in her afterword to the Feminist Press edition of the novel, wrote that "readers immediately recognized" the significance of the book, and that critics commented on Davis's revealing "the fictional possibilities in people who had been presumed to be inarticulate, or whom economic or social oppression had submerged."