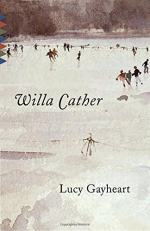 Willa Cather
This Study Guide consists of approximately 34 pages of chapter summaries, quotes, character analysis, themes, and more - everything you need to sharpen your knowledge of Lucy Gayheart.

The novel’s protagonist is a young woman named Lucy Gayheart. She was born and raised in the small town of Haverford, Illinois. Ever since childhood, Lucy has had a cheerful and energetic disposition. She was raised by her older sister Pauline and their father, watchmaker Jacob Gayheart. Lucy plays the piano, and at the age of 18, she moved to Chicago to study music under music professor Paul Auerbach. The main narrative begins in December of 1901, when Lucy is 20 years old. She is returning to Chicago after winter break to continue her studies. In Chicago, she attends a recital by Sebastian Clement, a friend of Auerbach’s who is a renowned classical singer. Lucy is greatly moved by Sebastian’s singing.

Auerbach soon recommends Lucy to be Sebastian’s accompanist, as Sebastian’s usual accompanist, James Mockford, will be undergoing hip surgery soon. Lucy begins to rehearse with Sebastian. She finds him polite but somewhat closed off in terms of emotional vulnerability. Sebastian is in his late forties and is married, but his wife is living in Europe. The narration reveals to the reader that Sebastian’s marriage has become a loveless one. Also, Sebastian is generally pessimistic as he considers mortality and the general loneliness of his life. Lucy develops romantic feelings for Sebastian, and Sebastian can sense this development. He does nothing to encourage the feelings, as he believes that they are merely the product of Lucy’s youthful naiveté.

One day, Harry Gordon, a childhood friend from Haverford, arrives in Chicago to visit Lucy. They watch operas in the city together. Lucy is somewhat irritated by Harry’s personality, which she views as somewhat conceited and overly practical. Harry proposes marriage to Lucy, but she refuses, declaring that she is in love with Sebastian. To spite Lucy, Harry returns home and hastily marries a young local woman named Harriet Arkwright. Sebastian soon develops reciprocal romantic feelings towards Lucy, as he cannot help but admire and be influenced by Lucy’s vigor and optimism. Sebastian asks Lucy to be his permanent accompanist, and he declares his love for her. Unfortunately, soon after, Sebastian goes on a vacation to Italy an accidentally drowns in a lake.

Lucy, devastated by the tragedy, returns home to Haverford. She clashes with her practically-minded sister Pauline. Lucy is also saddened to find that Harry ignores her whenever she tries to speak to him. Mrs. Ramsay, a friend of Lucy’s advises Lucy not to dwell on sadness and to instead live life to the fullest. Lucy attends a traveling music concert that does a performance in Haverford, and she is inspired to return to Chicago and pursue music again. Unfortunately, one winter day in Haverford, she goes for a walk outdoors, and the conditions are very bad. Harry passes in a horse-drawn sleigh but refuses to give Lucy a ride. Lucy then accidentally falls in the lake and drowns. 25 years later, Lucy’s father and sister are dead as well. Harry has led a rather lonely and unhappy life, and he feels guilty for Lucy’s death. In order to honor the Gayheart family, Harry resolves to maintain their house and property for as long as he can.

More summaries and resources for teaching or studying Lucy Gayheart.