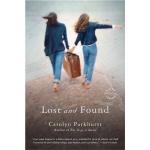 Carolyn Parkhurst
This Study Guide consists of approximately 55 pages of chapter summaries, quotes, character analysis, themes, and more - everything you need to sharpen your knowledge of Lost and Found.

This detailed literature summary also contains Topics for Discussion and a Free Quiz on Lost and Found by Carolyn Parkhurst.

Lost and Found by Carolyn Parkhurst is a story that traces the adventures of multiple pairs of contestants as they work their way through a game show by the same name. Selected for their potential for conflict under stress, team members must work together to decipher clues, unravel keywords and complete challenges that will test their meddle at every turn. At the conclusion of each round, the last pair to reach the meeting place is eliminated.

Laura and her daughter Cassie make up one of the initial teams, chosen after Cassie reveals to producers that she recently gave birth to a daughter her mother had no idea she was carrying until after the birth. The producers are hoping her story finds its way into the fluid and ever changing script. Jeff and his brother Carl were selected when Jeff revealed to the producers that Carl's son Benjamin almost died as an infant and required Carl to donate part of his liver to keep him alive. Juliet and Dallas are chosen for their former child star television fame and Betsy and Jason were high school sweethearts who recently reunited after a twenty year separation. Justin and Abby joined the game in the hopes that the public exposure would help them to spread the word that God is the answer to a gay lifestyle and a normal relationship with the opposite sex although both still struggle with the concept of a heterosexual relationship.

Each couple is constantly being filmed and are required to wear microphones, making privacy impossible for the duration of the game and they are not allowed to contact or inform friends or family of their participation or status until the show has aired. Along the way, contestants will be given clues that will take them from Egypt to Japan to Sweden to Denmark, coping with transportation issues, language barriers, and occasional Daredevil Rounds that test their courage and endurance. Whenever a team is eliminated, producer and show host Barbara Fox films their answer to the question, "You've lost the game, but what have you found?", and the producers tell contestants it is their hope that something profound or revealing will be their answer. Although that would be enough for most people to handle, there are several added twists including an opportunity to swap partners half way through the game. After a month of challenges that took the contestants to all corners of the globe, Laura and Carl cross the finish line in first place together. In the last half of the game, they not only work well together, but discover a shared compatibility that they enjoy after the game is over.

More summaries and resources for teaching or studying Lost and Found.