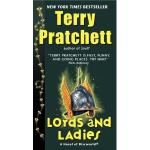 Lords and Ladies: A Novel of Discworld - Pages 1-26 Summary & Analysis

Terry Pratchett
This Study Guide consists of approximately 34 pages of chapter summaries, quotes, character analysis, themes, and more - everything you need to sharpen your knowledge of Lords and Ladies.

The three Lancre witches, Esme Weatherwax, Gytha Ogg and Magrat Garlick are returning home after brief tour of the Rim. Magrat is undecided about her relationship with Verence, the former court jester and new king of Lancre.

The action begins with a flashback. A young woman runs through the Lancre hills, with a young man chasing her. She outruns the man and finds herself at a circle of stones. A woman in red appears in the center of the stones and invites the girl in, but the girl is skeptical and asks who the woman is and why she cannot leave the stones.

Now in the present day, Jason Ogg, Lancre's blacksmith, who can shoe any animal, has a special visitor arrive with a late night job. Jason knows the rules and shoes the black horse without asking questions. Outside, in...

More summaries and resources for teaching or studying Lords and Ladies: A Novel of Discworld.

Lords and Ladies: A Novel of Discworld from BookRags. (c)2021 BookRags, Inc. All rights reserved.