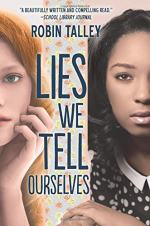 Talley, Robin
This Study Guide consists of approximately 51 pages of chapter summaries, quotes, character analysis, themes, and more - everything you need to sharpen your knowledge of Lies We Tell Ourselves.

Lies We Tell Ourselves Summary & Study Guide includes comprehensive information and analysis to help you understand the book. This study guide contains the following sections:

This detailed literature summary also contains Quotes and a Free Quiz on Lies We Tell Ourselves by Talley, Robin.

The following version of this book was used to create this study guide: Talley, Robin. Lies We Tell Ourselves. Harlequin Teen, 2014.

On February 2, 1959, Sarah Dunbar and nine of her peers are the first black students to attend the newly integrated Jefferson High School in Davisburg, Virginia. The other students push, throw objects, and scream profanities at them. The school administration places the new students in remedial classes, even though many of them, including Sarah, were at the top of their class and enrolled in college prep courses at their old high school. In remedial Math class, a red-haired white girl named Linda Hairston vacates her seat when Sarah sits down, and the rest of the students in Sarah’s vicinity follow suit. Then, in French class, the teacher pairs Sarah with Linda’s friend Judy, who struggles with the language and works with her black peer without complaint. Sarah’s friends inform her that Linda is the daughter of William Hairston, the editor of the Davisburg Gazette and a vocal opponent to integration.

The next day at school, some white boys run up to Sarah and grab her breasts. After the violation, she notices the boys chasing her little sister Ruth. Linda stops the bullies, led by Bo Nash, from harming Ruth. Linda goes to the bathroom with her friend Judy and they find Sarah crying there. The three of them are late to French class, so the teacher assigns them to work on a project together. Linda fears her father’s reaction to learning that she must work on a school project with a black student. She resolves to hide the matter from her father; she meets Judy and Sarah at Bailey’s Drugstore, where Judy has a job, to work on the project. Linda and Sarah argue. The next day, Linda writes an editorial for the school newspaper about her refusal to accept integration.

As Linda gets to know Sarah, she starts to deviate from her father’s belief that all black people are lazy criminals. She feels that Sarah is an exception because she is smart, polite, and talented. Linda writes an editorial for the school newspaper about how certain black people deserve to be treated the same as whites. However, she decides to get rid of the article before publishing it. She goes to the bathroom to flush the paper down the toilet and finds Sarah there. She lets Sarah read the editorial before she discards it. The two girls talk about their struggles with their families, but then Linda leaves with her friends when they see Linda and Sarah speaking together.

Bo Nash and his friends throw rocks at Sarah’s friend Paulie’s head. Linda witnesses this and inquires about the boy’s health the next time she sees Sarah at Bailey’s Drugstore. Sarah becomes upset that Linda watches her peers bully the black students and never interferes when it happens. They argue and then Sarah kisses Linda. Judy walks in, sees the girls kissing, and screams as Sarah runs away.

Sarah feels ashamed about her actions with Linda. She thinks that the Devil has made her sin and she never wants to see Linda again. The next day at school, the Music teacher Mr. Lewis gives Sarah a solo in the choir concert. Sarah goes on a date with her friend Ennis that weekend, but cannot stop thinking about Linda. On the night of the concert, the choir planned to sabotage Sarah’s performance by having the accompanist play Sarah’s solo wrong. Judy later tells Sarah that she made sure the accompanist would not show up to ruin her song. However, Mr. Lewis did not have the sheet music with him, so Sarah had to perform a cappella, after Linda’s solo, and she frightened the third soloist off stage with her talent.

After the concert, Sarah’s friends and family are proud of her. Her friend Chuck loudly says that she did a better job than Linda, and Linda responds by revealing his relationship with a white girl named Kathy Shepard in front of all the parents. Sarah brings her siblings home to a dark house, as her parents go to Chuck’s house to put out the burning cross white people lit in Chuck’s yard after hearing about his clandestine relationship. The next day, Chuck gets drunk and involved in a fight with Bo Nash and several other white boys outside of Bailey’s Drugstore. The boys gravely injure Chuck, so Linda waits with him as Sarah calls an ambulance. This altercation results in the principal of Jefferson High School expelling Chuck for becoming embroiled in a fight.

Linda writes an editorial for the school newspaper about how she believes that the white boys’ violent actions against Chuck were wrong and blacks do not deserve to be treated so poorly. Linda’s peers at school are shocked at this sentiment, other than Judy and Linda who support her. Linda invites Sarah over to her house, but they must run away after Mr. Hairston returns home, having read Linda’s recent article. Sarah and Linda kiss again. Then, they both return to their homes. Linda stands up to her father and flees to Judy’s house. Linda breaks up with her fiancé Jack. She accepts Sarah’s invitation to go with her to Washington, D.C. as Sarah works a summer job and then attends Howard University. The two girls graduate from Jefferson High School and leave Davisburg on a bus together.

More summaries and resources for teaching or studying Lies We Tell Ourselves.

Lies We Tell Ourselves from BookRags. (c)2022 BookRags, Inc. All rights reserved.