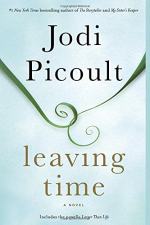 Jodi Picoult
This Study Guide consists of approximately 109 pages of chapter summaries, quotes, character analysis, themes, and more - everything you need to sharpen your knowledge of Leaving Time.

(Please note this plot summary and some sections of the guide contain spoilers for a major plot twist.)

The love of a daughter for her mother transcends even death in the novel “Leaving Time” by Jodi Picoult. Psychic Serenity Jones believes she has lost the ability to communicate with spirits when thirteen-year-old Jenna Metcalf comes to her for help in locating her mother, Alice Metcalf. Alice had disappeared the same day another woman was killed on the grounds of the New England Elephant Sanctuary. Jenna can’t believe her mother would have abandoned her willingly. Her hunch turns out to be right as she, Serenity and Virgil Stanhope, one of the cops who originally investigated the incident at the sanctuary, work together to unwind the mystery of Jenna’s past. The plot of the novel takes the reader through a variety of twists and turns in Jenna’s search for answers.

When Jenna decides to take her search for her missing mother into her own hands, she begins by contacting a psychic. Although her mother was a scientist, dedicated to researching elephant behavior, one of her journals includes a statement that even in science, there is a small part of some things that can’t be explained except by magic or the paranormal. When Jenna contacts Serenity, she does not know that Serenity’s career and name were tarnished years prior when she incorrectly predicted a senator’s kidnapped son would be found alive. Serenity has not heard from her spirit guides or from anyone in the spirit world since that time. However, after Jenna contacts Serenity, Serenity has a dream about Jenna’s mother and then later a computer glitch that she interprets as someone on the other side indicating to her she needs to help Jenna.

Meanwhile, Jenna also gets in touch with Virgil Stanhope, the washed up, alcoholic private investigator who had originally helped in the investigation of the death at the elephant sanctuary the night her mother disappeared. Although Jenna doesn’t know it, Virgil has been plagued by guilt because he believes he did not handle that case properly. Even though there were signs a murder had been committed, Virgil’s commanding officer encouraged him to ignore the evidence because he was getting pressure from the government to hush up the incident.

Together, the unlikely trio of investigators unravels the mystery behind Alice’s disappearance and discover that although Alice had run away from the elephant sanctuary that night, it was not she but Jenna who was missing. The novel address themes of grief and abandonment, mental illness and the paranormal as well as the helplessness one can fall into when questioning his own abilities.

More summaries and resources for teaching or studying Leaving Time.