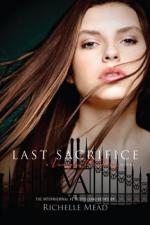 Richelle Mead
This Study Guide consists of approximately 41 pages of chapter summaries, quotes, character analysis, themes, and more - everything you need to sharpen your knowledge of Last Sacrifice.

This detailed literature summary also contains Topics for Discussion and a Free Quiz on Last Sacrifice: A Vampire Academy Novel by Richelle Mead.

Last Sacrifice is part of the novel series A Vampire Academy by number one best-selling author Richell Mead. In this novel, the author describes a world of vampires that live among the human race. One of the vampire races is the Moroi or vampires in the conventional sense. The other race of vampires is the Strigoi, which are evil vampires that formed when a a Moroi brings them back from death. Dhampirs are another race in the novel, which are the guardians of Morois. Finally, the Alchemists are liaisons between the vampire and human worlds. In other words, the Alchemists protect the human race from the vampire races.

Rose Hathaway is the main character. She is a dhampir that has wrongfully been imprisoned for the murder of the Moroi queen, Tatiana. Rose's former boyfriend, Dimitri, and her friends create a plot to break Rose out of jail, so they can work to find the real murderer while Rose is safely tucked away in a small town in West Virginia. When Dimitri, who is Moroi turned Strigoi, turned back into a Moroi and Rose arrive in West Virginia, they meet up with an Alchemist, Sydney Sage. Rose's father, Abe Mazur, is blackmailing Sydney to go against the Alchemist laws to help hide Rose, while helping to find who the real murderer of the queen is. Last Sacrifice is a story of coming of age and of the journey of a group of young adults who struggle to find out who they are and to live in a world of Moroi, dhampirs, Alchemists, and humans.

While Rose is on the run, her best friend, Lissa is trying to buy some time in the investigation by running for the royal Moroi court to replace the queen in the monarchy. Because of the law, Lissa cannot become queen because she no longer has any living relatives, which is a requirement to become queen. Lissa and Rose also possess a spirit bond, which allows Rose to see through Lissa's eyes what is happening at court, even when Rose and Lissa are not together. During the investigation Rose takes on with Dimitri, Sydney and some vampires they pick up along their journey, Rose uncovers that Lissa has an illegitimate sister, which allows Lissa to really run in the election for queen.

While encountering some obstacles along the way, Rose and Dimitri ultimately solve the mystery of who really killed Queen Tatiana. The duo also finds Lissa's illegitimate sibling and Rose and Dimitri also find love between each other once again.