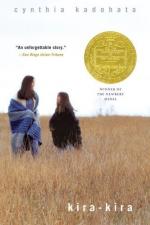 Related Topics
Cracker!: The Best Dog in Vietnam
A Place to Belong
Saucy

Cynthia Kadohata
This Study Guide consists of approximately 70 pages of chapter summaries, quotes, character analysis, themes, and more - everything you need to sharpen your knowledge of Kira-Kira.

How would the novel be different if instead of being set in the 1950-1960's, it were set in modern times? Would Katie and Lynn's relationship be different if the parents were able to keep their grocery store open and work regular hours?

Discuss the decision of the parents not to tell Katie the nature of Lynn's illness. Why don't they tell her? How would it change the story if they told her in the beginning? Would it change the way Katie relates to Lynn during the early stages of the disease?

Why does Katie steal the nail polish? Is it...

More summaries and resources for teaching or studying Kira-Kira.