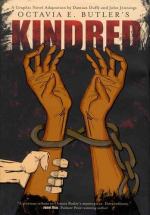 Damian Duffy
This Study Guide consists of approximately 41 pages of chapter summaries, quotes, character analysis, themes, and more - everything you need to sharpen your knowledge of Kindred.

This detailed literature summary also contains Quotes and a Free Quiz on Kindred: A Graphic Novel Adaptation by Damian Duffy.

The following version of this book was used to create this study guide: Butler, Octavia E., Adapted by Duffy, Damian, and Jennings, John. Kindred. Abrams Books, 2017.

Dana got transported to the 1800s for the first time a couple of days before her 26th birthday. She saw a boy drowning, so she plunged into the river to save him. She learns that the boy's name is Rufus, and Dana's reward for saving his life was a gun pointed at her head by the boy's father. When Dana thought she was about to die, she was transported back to the 1970s, where she lived with her husband, Kevin.

The next time Dana was transported to the 1800s, Rufus was slightly older, and he was about to burn the curtains in his room with a torch. Eventually, Dana realized that she got transported to the past whenever Rufus was in trouble, because Rufus was supposed become the father of her great grandmother, and Dana returned to her home whenever her life was in danger. Furthermore, she discovered that she could be in the 1800s for months at a time, but in the 1970s, only a couple of hours might have passed.

After saving Rufus from burning down the house, Rufus revealed to Dana that she was at the Weylin Plantation. Dana then realized that she must protect Rufus and the future mother of his children, Alice. Dana asked Rufus where Alice was, so Rufus directed her towards the cabin where Alice's family lived, and Alice made her way over there. Upon arriving at Alice's cabin, she witnessed some patrollers whipping Alice's father and taking him away. Dana introduced herself to Alice's family, and Alice's mother invited Dana to stay with them. However, when Dana left the house to grab Alice's blanket, a patroller spotted her and began to beat her, at which point Dana transported back to the 1970s.

Back at her apartment, Dana recovered from her wounds with Kevin's help. Kevin helped her prepare for the next time she transported to the plantation. Some months passed, and when Dana felt the pull that indicated her transportation, Kevin held onto her so that he travelled with her. They found Rufus in the woods with a broken leg, so they helped him return to the Weylin plantation. When they met Tom Weylin, Rufus's father, Kevin posed as Dana's master. Tom Weylin gave jobs to Kevin and Dana, so they lived on the plantation for a few months. Dana started teaching Rufus to read by Tom's request, and she taught some of the slaves' children how to read in secret. Tom Weylin soon discovered that Dana was teaching the slaves how to read, so he threw her outside and began to whip her. Kevin ran outside to save her as soon as he realized what was happening, but Dana transported back to the 1970s without Kevin.

At her apartment, Dana packed a bag full of supplies and lived a secluded life for a few months before she transported back to the 1800s. She arrived at a scene of violence. Rufus had become a young adult, and he was fighting with Alice's husband, Isaac. Dana convinced Isaac and Alice to run away while she took care of Rufus and returned with him to the plantation. Upon their arrival, Dana discovered that Kevin left a long time ago, so she told Rufus to write him a letter. Unbeknownst to Dana, Rufus never mailed the letter, but Tom had sent one to Kevin on his own accord.

Dana continued her life on the plantation, and Rufus found Isaac and Alice. He tortured Isaac and kidnapped Alice after severely injuring her. Dana took care of her, but Dana eventually decided that she wanted to leave the plantation, so she tried to escape. She got caught and Tom Weylin whipped her.

The following day, Dana was working in the fields when she saw Kevin return. As they started to leave the plantation, Tom tried to shoot Dana, so Dana and Kevin were transported back to their home in the 1970s. When they returned, Kevin struggled to readjust to modern life, and on the same day of their return, Dana got transported back to the 1800s. She saved Rufus once more, and returned to the plantation to find Tom looking old and sick.

Dana returned to her old duties at the plantation, and after some time, Rufus had two children with Alice, one of whom was Dana's great-grandmother. One day, during a party held by the slaves, Rufus saw one of the slaves trying to seduce Dana, so Rufus sold him. Dana was outraged, so she slit her wrists in order to transport herself back to the 1970s.

Kevin and Dana managed to spend 15 days together in the 1970s, but Dana was eventually transported back to the plantation. She discovered that Alice had killed herself because Rufus told her that he sold their children. However, Rufus had only said this to scare Alice, and he had not actually sold them. Dana made him promise to give them freedom from slavery, and Rufus obliged. Rufus then proclaimed that he wanted Dana to stay with him forever, so Dana ran to a shed to grab a knife. Rufus followed Dana, and Dana killed him, causing her to transport back to the 1970s. The novel ends with Dana and Kevin readjusting to modern life.

More summaries and resources for teaching or studying Kindred: A Graphic Novel Adaptation.