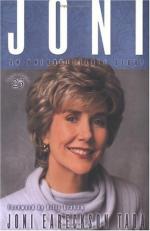 Joni Eareckson Tada
This Study Guide consists of approximately 29 pages of chapter summaries, quotes, character analysis, themes, and more - everything you need to sharpen your knowledge of Joni.

Chapter 16 and Epilogue Summary and Analysis

One day in 1974, Joni receives a phone call from "The Today Show" asking her to be a guest. Joni, Jay and several other friends drive to New York for the appearance. Joni is interviewed by Barbara Walters. As Barbara introduces the segment, the camera pans over a large display of Joni's artwork. Joni tells her personal story and her journey to the Lord. She feels blessed that she is able to provide testimony of the Lord's glory to millions of people at once!

Executives of the PaperMate Company are watching and note that she uses one of their products, the Flair Pen. As a result, they arrange for several showings of Joni's artwork. She is in demand for interviews and exhibits and can barely keep up with orders for her art. She is deluged with people...

(read more from the Chapter 16 and Epilogue Summary)