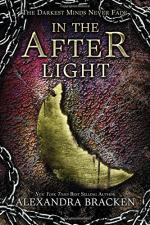 In the Afterlight Summary & Study Guide

Alexandra Bracken
This Study Guide consists of approximately 69 pages of chapter summaries, quotes, character analysis, themes, and more - everything you need to sharpen your knowledge of In the Afterlight.

In the Afterlight Summary & Study Guide includes comprehensive information and analysis to help you understand the book. This study guide contains the following sections:

This detailed literature summary also contains Quotes and a Free Quiz on In the Afterlight by Alexandra Bracken.

The following version of the book was used to create this study guide: Bracken, Alexandra. The Darkest Minds: In the Afterlight. Hyperion, New York, New York, 2014. Kindle AZW file.

Ruby Daly is a teenage girl with the power to read and control the minds of other people because of a mysterious disease called IAAN. By the time Ruby was 10, most American children were dead and those who remained were imbued with supernatural powers. Ruby, unaware of what she could do, wiped herself from her parents' memories. They did not recognize her and sent her to a prison camp where children with powers were held. A member of the Children's League helped her escape. Ruby tried to avoid joining the League after realizing they were not interested in saving the children in the camps. However, circumstances forced her to join. By the time the second novel of the series came to an end, the remnants of the U.S. Government had destroyed League headquarters, killing some of the children there. A group escaped, and the third novel of the series begins with Ruby trying to help the group get out of Los Angeles.

Ruby is 17, and her abilities are classified as orange, one of two classes that people fear the most. Those with orange abilities can read minds and erase memories. Ruby struggles with her power, knowing she could easily cause people to lose their trust in her. She has come to see herself as a monster because that is how most adults see her. Her group is trying to find a way out of Los Angeles, which is under military control. She slips into the mind of a soldier and discovers several weak points. While making plans to get the group out of the city, she overhears some soldiers talking about the children. The conversation makes Ruby uneasy and she slips into the mind of one of them, discovering that they plan to turn the children over to the authorities, then use the reward money to fund their real objective – the overthrow of the government.

Ruby confides in Cole Stewart, a young man in her group who has managed to keep his abilities hidden from almost everyone. They decide that Ruby will plant the idea for the soldiers to split off from the children, leaving the children free to go to another safe house alone. They arrive safely at the Ranch, a bunker that is one of several still kept by the League.

Over the coming weeks, the group comes up with a plan to rescue children from two camps. Oasis is a small camp and will basically serve as a trial run while Thurmond is a huge camp where Ruby and several others have been held. Ruby's group has officially split from the League by this point, and they are divided within the group by their views on what should happen next. Ruby and Cole are the leaders, but Cole's younger brother Liam is quickly gaining a following. Liam wants to use the media to inform the public about the conditions of the camps, and he believes the adults will take over so that the children do not have to actually fight.

From the earliest days of realizing what she can do, Ruby has hoped for a cure for IAAN. Clancy is a boy who also has Ruby's abilities, but he has ruthlessly used them for his own selfish purposes. He is the son of U.S. President Gray and had been coercing members of the government until someone discovered what he was doing. Clancy was tortured, as were many children with abilities, in the name of science. His mother, Lilian Gray, is a scientist and she touts her cure for the children. Clancy warns Ruby not to trust Lilian's cure, but Ruby holds to the hope that Lilian will save the children. Lilian reveals two pieces of information that rock Ruby's world. The government put chemicals in water supplies all over America, which caused the IAAN to manifest in children and her cure is a device implanted into the child's brain that switches off their abilities. The operation is dangerous and the device has to be maintained. Ruby and the others are heartbroken that there is no cure.

Ruby's group, with help from Liam and Cole's stepfather, invades Thurmond. They learn that children with red ability – which includes the power to create and control fire – are being turned into soldiers. They free the children and find parents of most are waiting when the children leave the camp. Political powers outside the U.S. take control of the country and officials begin to work on plans for the future. Some want to force the children to have the implant but some argue that the government cannot take away their right to choose unless they pose a danger. As the novel comes to a close, Ruby and four of her closest friends take an hour to go for a ride together. Ruby compares their future to the open road ahead of them.

More summaries and resources for teaching or studying In the Afterlight.

In the Afterlight from BookRags. (c)2022 BookRags, Inc. All rights reserved.