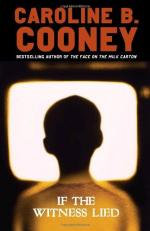 If the Witness Lied Summary & Study Guide includes comprehensive information and analysis to help you understand the book. This study guide contains the following sections:

This detailed literature summary also contains Topics for Discussion on If the Witness Lied by Caroline B. Cooney.

If the Witnessed Lied is a novel by the best-selling author of The Face on the Milk Carton, Caroline B. Cooney. The story follows the Fountain children in the aftermath of their mother's death and then their father's death, both within a few years of each other. The two boys, Jack and Tris, live in the Fountain home with their mother's step-sister, Aunt Cheryl. Smithy, the youngest girl, is away at boarding school. Madison, the oldest and the oldest girl lives with her godparents.

As the novel and the story unfolds, the Fountain children reunite. Putting various clues together, they come to the conclusion that their Aunt Cheryl is actually responsible for their father's death and not their baby brother, Tris, who was accused of the murder.

In addition, the Fountain children unite to protect their baby brother, Tris, from being exploited in a docudrama their aunt has agreed to shoot with a director and producer. In this coming of age story, the Fountain children not only uncover the truth and clear their baby brother's name, but they also learn how to be a family once again even in the absence of their parents.