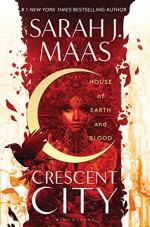 House of Earth and Blood Quotes

Sarah J. Maas
This Study Guide consists of approximately 78 pages of chapter summaries, quotes, character analysis, themes, and more - everything you need to sharpen your knowledge of House of Earth and Blood.

If she’s smart, she’ll lie low and not attract the attention of any other powerful immortals for the rest of her life.
-- Isaiah Tiberian (chapter 6)

Importance: Maas foreshadows that Bryce’s life will become more complicated if she becomes involved with more powerful figures after Danika’s death. While Isaiah thinks it is in Bryce’s best interest to avoid this fate, Bryce ends up doing the complete opposite.

It was perhaps the only smart thing Bryce Quinlan had ever decided to do.
-- Narrator (chapter 10)

Importance: This statement demonstrates how the third-person narration takes on the voice of different characters. In this chapter, Maas uses Hunt’s perspective to demonstrate his initial judgments of Bryce’s character.

Do try not to die, Bryce. I’d hate to endure the inconvenience of training someone new.
-- Jesiba Roga (chapter 12)

Importance: This casual warning epitomizes Jesiba’s character with her little regard for Bryce’s life. Jesiba proves herself to be selfish...

More summaries and resources for teaching or studying House of Earth and Blood.

House of Earth and Blood from BookRags. (c)2022 BookRags, Inc. All rights reserved.