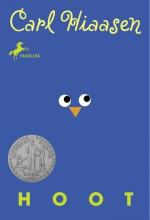 Carl Hiaasen
This Study Guide consists of approximately 26 pages of chapter summaries, quotes, character analysis, themes, and more - everything you need to sharpen your knowledge of Hoot.

Roy is forced to write Dana Matherson an apology letter for breaking his nose.

Mullet Fingers steals the seats to all the heavy equipment waiting to clear the ground at the construction site.

The Sibley Guide to Birds

The Sibley Guide to Birds is a book about the different known species of birds. Roy uses this to show his father the burrowing owls.

Roy has an old bicycle that is his main source of transportation around Coconut Cove. Beatrice steals Roy's bicycle at one point to get his attention. Later, Beatrice steals another bicycle to get Roy and herself off school property quickly after tying Dana Matherson to a flagpole in his underwear.

Branitt lives in the construction trailer for several days in hopes of catching the vandal. It is in the trailer that Dana is told a case of cigarettes is...

More summaries and resources for teaching or studying Hoot.