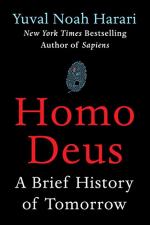 The following version of this book was used to create this study guide: Harari. Yuval Noah. Homo Deus: A Brief History of Tomorrow. HarperCollins, 2017.

Homo Deus: A Brief History of Tomorrow by Yuval Noah Harari describes and discusses broad possible futures for humanity, based on its past development. It builds on Harari’s earlier work, Sapiens, though can be read and understood separately. The author argues that humanity is reaching a major turning point in our history and that emerging technologies will dramatically change our societies and experiences.

The book opens by noting that humanity has largely conquered the threat of famine, epidemic, and violence. Though these still exist, they have been curtailed significantly and could reasonably be eliminated in the coming decades. Additionally, they are considered problems that can be solved, rather than inevitable parts of human existence. As a result, humanity will move on to two new initiatives, achieving immortality and ensuring universal happiness. Unlike past developments in which we improved our technology, these will require upgrading humans directly. In Harari’s view, this would constitute a new species, which he refers to as Homo deus. The work goes on to explore this idea in great detail and address many of the ethical and philosophical questions that may arise.

In the first full section of the book, Harari provides a historical overview of humanity’s rise to dominate our environment. He argues that humans have the unique ability to create and share imagined realities, allowing us to cooperate on a far greater scale than other species. As a result, we have developed massive and complex societies. Simultaneously, these intersubjective realities shape the objective one and determine many of the characteristics of our cultures. The most important of these shared myths are religions, which the author defines as an all-encompassing story that justifies human norms and values (180). The author argues that it is important to understand the role played by religions, as they will largely determine the path of our future development.

Currently, the dominant human religion is liberalism, which holds that human beings are inherently valuable individuals with free will. Our inner experiences serve as the source of meaning in the universe and thus eliminate the need for a superhuman deity. This belief system has allowed us to maintain a meaningful experience, despite not having God to explain and order our lives. Liberalism is further responsible for many of the most important modern institutions, such as democracy and capitalism. Despite this, Harari argues that liberalism’s core ideals are not supported by scientific evidence. Recent research suggests that humans are neither individuals, nor do we have free will. Instead, we are composed of a series of random and deterministic physical processes. Though humans may be unique in our experience of consciousness, Harari argues that this is ultimately insignificant, given that artificial intelligence has proven to be far more effective at processing information.

Because of this, Harari argues that humans risk losing their status as the dominant form of life. He notes that, without liberalism, we can be considered nothing more than biological algorithms. More effective artificial algorithms, therefore, could replace us over time. Harari suggests that this process could lead to the emergence of one of two “techno-religions.” The first of these is techno-humanism, in which humans remain the dominant species, but upgrade ourselves through bioengineering to the point where we constitute an entirely new species. More dramatically, Dataism, which preferences the free flow of information above all else, could become the dominant religion. In this scenario, humans would only be valued to the extent that they can process data and contribute to the freedom of information. The author concludes by noting that this work discusses possibilities, not prophecies. He encourages the reader and society in general to more carefully evaluate the ethical and philosophical implications of technological development.