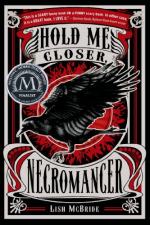 Lish McBride
This Study Guide consists of approximately 44 pages of chapter summaries, quotes, character analysis, themes, and more - everything you need to sharpen your knowledge of Hold Me Closer, Necromancer.

This detailed literature summary also contains Quotes and a Free Quiz on Hold Me Closer, Necromancer by Lish McBride.

Hold Me Closer, Necromancer is the story of Sam, a young man working a dead-end job at a fast food restaurant, who learns he is a necromancer (one who can bring the dead back to life). One night while playing potato hockey in the parking lot with his friends, a bad shot takes out the taillight of a foreboding man. When the man comes into the restaurant to confront them about the broken taillight, he’s struck by Sam. He asks Sam why he hasn’t registered with a mysterious group called The Council. Later, a man claiming to have been sent by Douglas Montgomery comes to see Sam, and ultimately, Sam is attacked in the parking lot, leaving deep gashes dug into his back.

With the help of his friends, Ramon, Frank, and Brooke, Sam begins to piece together what is happening to him. But when Brooke’s reanimated head is delivered to Sam’s doorstep, Sam is confronted with no other choice than to meet with Douglas Montgomery. While Sam takes Douglas’ threats seriously, he doesn’t understand why he’s been chosen or why Douglas thinks Sam possesses the gift of necromancy, bringing the dead to life. Douglas wants Sam to become his apprentice, giving Sam a week to decide.

While Sam contemplates Douglas’ offer, Sam confronts his mother Tia. During their discussion, Tia reveals that she is a witch and that Sam’s biological father’s family has a dominant gene for necromancy. Nick, Sam’s uncle, and Tia joined forces and placed a powerful binding spell on Sam as an infant in order to protect him from falling under control of Douglas and the Council.

Sam struggles to understand what’s happening and contacts June, another necromancer who lives in another territory. Unfortunately, June is unable to help Sam before he refuses Douglas’ offer, which forces Douglas to escalate his demands. One night while out for a walk, Sam is abducted by a werewolf in Douglas’ employ. Sam is thrown in a cage with Brid, a fey-werewolf hybrid, whom Douglas has abducted. Brid is able to inform Sam about Douglas and the world of the hybrid wolves. They form a bond and vow to plan an escape, but first Sam must endure the horrors of Douglas’ tutelage. Douglas tries to teach Sam how to use his necromancy, but Sam fails. Douglas isn’t sure if Sam’s powers are that weak or if he’s deliberately working against Douglas.

When Sam goes missing, Ramon seeks to help and contacts June. She gives Ramon explicit instructions to have Tia break the binding spell and asks him to contact Brannoc, Brid’s father and Council member. Tia breaks the binding spell and enlists the help of Sam’s neighbor Mrs. Winalski to help with Sam’s rescue. Ramon joins with the wolf pack in the attack on Douglas’ mansion to rescue Sam and Brid.

The binding spell broken, Sam newfound powers are unleashed. While Douglas seeks to steal Sam’s power, Sam brings to life all the people that Douglas has harmed over the years. A battle ensues between the undead, Douglas, and the wolves and other shapeshifters. Sam harnesses his newfound powers to defeat Douglas.

While recuperating at a hospital clinic run by the werewolves, Sam learns that he has inherited all of Douglas’ worldly possessions and his place on the Council.

More summaries and resources for teaching or studying Hold Me Closer, Necromancer.