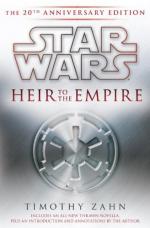 Heir to the Empire Setting & Symbolism

Timothy Zahn
This Study Guide consists of approximately 45 pages of chapter summaries, quotes, character analysis, themes, and more - everything you need to sharpen your knowledge of Heir to the Empire.

A Sparti cylinder is a metal object that Luke uncovers on Dagobah and takes with him to Nkllon for Lando to identify. Lando tells him that it is a beacon call for a ship, like a remote. Lando dates the cylinder to the pre-Clone War era.

Bpfassh is a double planet with a complicated system of moons around it. It is against Bpfassh that the Empire strikes out at as part of its three-pronged attack in preparation for the Sluis Van attack later on.

Sluis Van is a New Republic shipyards station. The shipyards store about a hundred ships. The Empire...