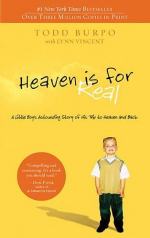 Heaven Is for Real: A Little Boy's Astounding Story of His Trip to Heaven and Back - Chapters 16-20 Summary & Analysis

Todd Burpo
This Study Guide consists of approximately 23 pages of chapter summaries, quotes, character analysis, themes, and more - everything you need to sharpen your knowledge of Heaven Is for Real.

In August, Todd takes Colton to work with him as he goes to install a garage door. The boy isn't very interested in the job, but he likes riding in the truck. During the trip, Colton asks his father if he had a grandfather named Pop. After asking this, he tells Todd that Pop was very nice. Todd is floored because Pop had died a quarter of a century before Colton's birth. The boy mentions that he knew his father was very close to Pop.

Todd thinks back to his childhood and to how close he was with his grandfather. He often visited him because his father had bipolar disorder. When he had the episodes, his mother would send the children to the grandparents. His grandfather was a well-loved farmer who only attended church occasionally. Todd's...

More summaries and resources for teaching or studying Heaven Is for Real: A Little Boy's Astounding Story of His Trip to Heaven and Back.

Heaven Is for Real: A Little Boy's Astounding Story of His Trip to Heaven and Back from BookRags. (c)2021 BookRags, Inc. All rights reserved.