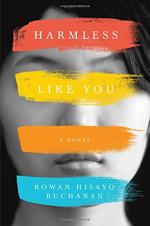 Rowan Hisayo Buchanan
This Study Guide consists of approximately 51 pages of chapter summaries, quotes, character analysis, themes, and more - everything you need to sharpen your knowledge of Harmless Like You.

Harmless Like You Summary & Study Guide includes comprehensive information and analysis to help you understand the book. This study guide contains the following sections:

This detailed literature summary also contains Quotes and a Free Quiz on Harmless Like You by Rowan Hisayo Buchanan.

The following version of this book was used to create this study guide: Buchanan, Rowan Hisayo. Harmless Like You. W.W Norton & Company, 2016.

The novel opens with a brief prologue introducing one of the narrators, Jay Eaves, visiting his estranged mother in Berlin to work out the details of his deceased father's estate. She does not recognize her own son.

The time period switches to 1968, and the narrator is Yuki Oyama, Jay's mother. She lives with her parents in New York City, but they are planning to move back to Japan soon. Yuki is not very popular at school, but one day she meets a friendly, waifish girl named Odile Graychild. The girls become fast friends, and when it comes time for Yuki's family to move, she begs her parents to be allowed to move in with Odile and her mother Lillian instead. They allow it. Lillian Graychild is a permissive parent, distracted by her work writing romance novels and her relationship with her volatile younger boyfriend, Lou. One day, the girls meet a fashion photographer and his friend, an architecture student named Edison. The photographer invites Odile to model for him. When something happens at the shoot that Odile refuses to talk about, she begins distancing herself from Yuki. Meanwhile, Yuki becomes overwhelmed by loneliness, until Lillian's boyfriend begins to pay attention to her.

Lou takes Yuki to the Whitney, where she is overwhelmed by the art and the experience of being taken for an exhibit herself by some patrons. She wants to be an artist. Lou gets her a job at the countercultural newspaper where he works as a sportswriter. Odile goes to Italy for a modeling job. Yuki, feeling Lou is the only important thing in her life, drops out of high school and starts working full-time. Lou breaks up with Lillian and Yuki moves in with him. As the relationship progresses, he starts hitting her when he gets angry. He also pays no attention to her art, ambitions, or feelings. When she organizes a show of her photographs, he barely looks at it.

Meanwhile, in the present tense (a few months before the scene in the prologue), Jay has just had a baby with his wife, Mimi, and he is having a hard time adjusting to fatherhood. He secretly worries he will leave his family, as his mother did. We learn in a flashback that he was unfaithful while Mimi was pregnant. When his father dies and leaves his house in Connecticut to Yuki, Jay realizes he must go to Berlin and have her sign the deed. Jay and Mimi quarrel over Jay's therapy animal, a hairless cat named Celeste who helps Jay control his panic attacks. She is old and sick and Mimi thinks she should be put down. Instead, Jay brings her to Berlin with him.

Yuki signs up for a life drawing class, where she runs into Edison, the fashion photographer's friend. They begin having coffee together after class, and talking about Yuki's art. Edison is much more attentive and kind than Lou. Yuki begins to unravel mentally/emotionally for various reasons, things are bad with Lou, she feels dissatisfied with her art, her father dies, and the war in Vietnam is upsetting. She throws a tantrum and tears up Lou's poetry, despite the fact that he hit her the last time she touched it. He comes home, ignores the poetry, and tells her that he has been seeing another woman, that the woman is pregnant, and they are getting married. Yuki runs to Edison in distress, and he immediately proposes to her. She agrees to marry him, despite the fact that she clearly does not love him.

They get married and move into a house in Connecticut. Despite having a studio, supplies, and plenty of time, Yuki finds she cannot paint. She is frustrated and she finds herself disgusted with Edison. She misses Lou, who was passionate, and could inspire passion in her. She gets pregnant, and passively tries to end the pregnancy by crashing her bicycle. It does not work. After Jay is born, Yuki feels like her life is over. She has turned the studio into a nursery, and she feels like she will never be able to make art again. She picks fights with Edison constantly. In a particularly bad argument, she hits him, and turns around to see young Jay is watching. That night, she decides to leave, just for a while, until she feels better.

Back in the present, Jay finds Yuki in Berlin. She is ill, her apartment is a mess, and she has self-inflicted burn marks on her arms. He pities her, and tries to clean things up and take care of her. She says she does not want the house in Connecticut. Suddenly, Celeste the cat has a seizure, and they must whisk her off to the vet. Yuki encourages Jay to euthanize Celeste, for the cat's sake and to please his wife. Jay starts to have a panic attack, but manages to recover on his own, and decides she is right. Just as the vet is about to administer the injection, Yuki intervenes. She will take Celeste home and keep her. Jay is grateful. He receives a call from Mimi, telling him that their baby has been in the hospital. He realizes that he had no reason to worry. He loves his wife and his daughter and he would never leave them. He is not Yuki. She did not genetically pass on to him the desire to flee. Jay goes home to New York, promising Yuki he will visit again. In an epilogue, Yuki reflects on how she had thought to return to Jay when she felt better, but this had never happened. Ultimately, she feels grateful that she was able to do a small thing for him by taking care of Celeste.

More summaries and resources for teaching or studying Harmless Like You.

Harmless Like You from BookRags. (c)2022 BookRags, Inc. All rights reserved.