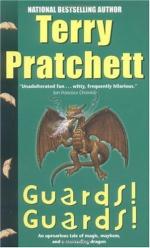 This detailed literature summary also contains Topics for Discussion and a Free Quiz on Guards! Guards! by Terry Pratchett.

The city of Ankh-Morpork no longer has a king and is now ruled by a corrupt Patrician. A secret society calls a dragon with the understanding that whoever kills it will be named King and bring a new rule to the kingdom. Things go wrong when the dragon is crowned King of the city and the four members of the Night Watch Guard must keep the new king from eating the citizens.

The secret society known as the Elucidated Brethren of the Ebon Night call the dragon to the city. They want to scare the people to the point that when a hero shows up to kill the dragon he will be crowned the king unconditionally. The leader of the Elucidated Brethren is called the Supreme Grand Master. In reality he is the secretary to the Patrician that controls the city. He believes that he will be able to get a king into the city that will listen to him and do what he commands.

The Night Watch consists of Captain Vimes, Sargent Colon, Corporal Nobbs and the newest member Carrot Ironfoundersson. They are drunkards and thieves with the exception of Carrot who takes everything very literally and feels the need to uphold each law to the fullest. When the dragon first appears they seek the help of someone that breeds swamp dragons which are a smaller pet-like breed of the noble dragons. Her name is Lady Sybil Ramkin. She gives Captain Vimes a swamp dragon of his own. He is a small dragon that was a throwback. He doesn't look right and Lady Ramkin intended to have him put down. Captain Vimes names him Errol. After seeing the larger noble dragon Errol begins to eat odd things and his belly swells continually and he begins to smoke out the ears.

When the larger dragon is summoned to the plaza a young man chosen by the Supreme Grand Master comes and pretends to kill the dragon. The city is ready to have him crowned king when the dragon reappears and kills the king and takes the crown for his own. The dragon makes a decree that one maiden of noble blood will be killed every month to satisfy his hunger. The first one chosen is Lady Ramkin.

Captain Vimes learns that the Patrician's secretary is the one that has been summoning the dragon. Vimes is cast into the dungeon with the Patrician but quickly escapes. Nobbs, Colon and Carrot attempt to kill the dragon with a single lucky arrow but miss. They were trying to save Lady Ramkin from being sacrificed to the dragon. When the dragon attacks them Errol shows up blowing a great flame that he should never have been able to make. The flame continues but doesn't kill the dragon. They are confused until they realize that he is trying to win the dragon as a mate not fight it. The dragon is female.

Wonse is accidently pushed out the window and the Patrician is back in power. The members of the Watch are given rewards for their services and Lady Ramkin and Vimes decide to see where their relationship will lead. The dragon and Errol are not seen from again and it is not known what happened to them.