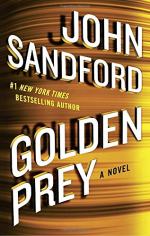 John Sandford
This Study Guide consists of approximately 60 pages of chapter summaries, quotes, character analysis, themes, and more - everything you need to sharpen your knowledge of Golden Prey.

Some law enforcement agents think that Garvin Poole, a notorious robber and killer, is dead. However, Poole is very much alive in Dallas, Texas, where he is living with his girlfriend, Pandora Box. The couple is living off the money from a past robbery. Following the robbery, Poole had converted the money into gold which he is now selling. He is getting nervous, however, as he thinks that the buyers of the gold are becoming suspicious of him. Poole's and Box’s only other source of income is the money Poole makes from fabricating customized guitars. This does not bring in enough income, however. So, when his friend Sturgill Darling comes to him with a plan to rob a drug-cartel counting bank, Poole decides to pull off one last job.

Poole and Darling's robbery is a success. But, in the process, Poole kills a six-year-old girl. He suffers from a flesh wound. Afterwards, Poole and Darling split the money and go back to their respective homes. They are unaware that the robbery has brought Poole to the attention of the law enforcement agencies and to the drug-cartel from which the money was stolen. The law enforcement agencies now know that Poole is alive, and they want to capture him, especially as he has killed a child and a policeman. The dug-cartel boss wants his money back. When Lucas Davenport, a U.S. Marshall, hears about Poole, he decides that hunting for him is the type of case he has been looking to find. The drug-cartel boss brings in two of his people, Soto and Kort, to find and punish Poole. Like Davenport, they do not know where he is; so, their approach is to find people he knows and torture them with the hopes that they will reveal his location.

Both groups start in the same place, with Poole’s parents. However Soto and Kort reach them first. As a result, Lucas discovers the existence of the drug-cartel killers. Lucas and the team of Soto and Kort follow their respective leads until they both find the same name of a possible connection to Poole, Sturgill Darling. Lucas gets to Darling’s farm first and while he is there Soto and Kort arrive. There is a gun fight. Soto and Kort leave and Lucas chases them. During the chase, Lucas’ car rolls into a ditch. Soto and Kort do not return to Darling’s farm, but decide that they may be able to get fresh leads by finding out who Lucas talks to and then torturing them. They plan to track Lucas via his cell phone. After they make this decision, Lucas goes to see a man named Arnold. Afterwards Soto and Kort kill him. When Lucas hears the news, he realizes that someone knows his actions and is giving his plans to the drug-cartel killers. At first, he thinks that it is someone involved in one of the law enforcement agencies with whom he is working. When he realizes that Soto and Kort are using his phone to trace him, he sets a trap to catch them. He manages to catch Soto. However, Kort, who was driving in a separate car, kills Soto before Lucas has a chance to talk to him. The police later identify Kort from the cartridge she used to kill Soto.

In the meantime, Darling goes to see Poole and Box. They decide that it is best to leave. Darling agrees to help them. They take two separate cars. Darling and Poole drive in one, and Box is in another. They also divide the money between the two vehicles.

As it turns out, the police have the license plates of the vehicle Box is driving. After realizing that they have spotted her, she calls Poole who instructs her to hide the money. She does so and tosses the phone she used to call Poole before she is caught. When Lucas finds out about her arrest, he goes to talk to her, but she only says that she wants to see a lawyer. They search the truck and the area near it and find the tossed phone. Using it, they are able to get a good idea of Poole’s location and a sense of where he is going.

While all of this is going on, two women, Annie and Rosie, have come to join Kort to help her find the money and Poole. After Box’s arrest, they receive instructions to abduct her. They take care not to harm her during the abduction because she immediately tells them that Garvin will trade the money for her. They call him and he tells them where to go so that they can meet. While Annie and Rosie get along with Dora, Kort does not. However, Kort also does not get along with Rosie and Annie.

The women travel toward El Paso which is where they are to meet Poole. Darling and Poole take an alternate route after figuring out that the police may be using Poole’s phone to locate him. Poole tries to misdirect them by putting his phone on another man’s car. Lucas has already determined that they may take the alternate route which sends them through Marfa and is there waiting for them in case they arrive.

Darling and Poole think they are safe until they arrive in Marfa. Then they see the roadblock. There is a shootout. The police kill Darling, and Lucas kills Poole. Before he dies Poole calls Dora and her captives to tell them that he does not think he will be able to escape. He lets them know where the truck is with the money. He also tells Dora that he loves her. In spite of Kort’s protests, the women go to Marfa. Once they arrive, they see that the police have found the truck and Dora knows that Poole is dead. Afterwards, Kort attacks Dora. Dora grabs a screwdriver she has hidden and stabs Kort in the brain with it. They leave the injured Kort at a convenience store. A tourist later finds her, but Kort dies during surgery. Once Kort is gone and the girls focus on Dora, Dora tells them about the money she hid. They go to retrieve it. While they are in the woods, Annie comes up to Dora and asks her for a kiss.

Lucas returns to his office in Minnesota. The democratic candidate for president who has backed Lucas until now loses the election. This fact makes Lucas’ boss, who resents Lucas’ independence, think that he can tell Lucas what to do. Lucas, however, has the backing of the governor and the former and future state senator as well. They pay a visit to his boss telling him to leave Lucas alone.

More summaries and resources for teaching or studying Golden Prey.