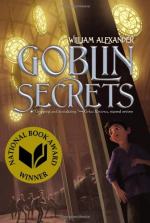 William Alexander
This Study Guide consists of approximately 37 pages of chapter summaries, quotes, character analysis, themes, and more - everything you need to sharpen your knowledge of Goblin Secrets.

“Goblin Secrets” is a young adult fantasy novel by William Alexander. When the novel begins, Rownie is one of a number of stray and orphaned children the witch Graba has forced into working for her by offering them shelter. While on an errand for Graba in the City of Zombay, Rownie discovers a goblin troupe, headed by Thomas and Semele, will be putting on a play. Theatre is outlawed in Zombay under the knowledge that actors pretend, and therefore are liars. Rownie hopes to see as much of the show as possible before it is shut down by the Captain and the City Guard. Thomas explains to the audience that the play is indeed not illegal because goblins are not legally considered people or citizens, and therefore not bound by city laws. Thomas asks for a volunteer actor from the audience. Only Rownie volunteers. He feels empowered acting. It makes him think of how his brother, Rowan, missing for several months, was an actor before the ban against theater went into effect. Though he enjoys the show, Rownie earns the wrath of Graba for failing to carry out his errand.

Rownie escapes from Graba and falls in league with Thomas, Semele, and the other members of their goblin group, Essa, Patch, and Nonny. They invite Rownie to come along, offering to teach him their craft of theater in exchange for help in finding Rowan. They reveal that they need an human person who can wear and control a mask to help them prevent the River that flows through Zombay from flooding and destroying the city. Rownie, however, worries that his brother is dead. Semele assures Rownie that this cannot be so, because Graba is also looking for Rowan and would not look for Rowan if Rowan was dead. Meanwhile, Thomas and the goblins begin to teach Rownie the art of theater and bring him to their secret home in the Clock Tower on Fiddleway Bridge, which spans the Zombay River between the Northside and Southside of the city.

Rownie decides to confront Graba, to see if she knows anything about Rowan. He asks Vass, one of Graba’s strays, to deliver the message. She agrees, but brings the Mayor to meet Rownie instead. Rownie learns that the Mayor has outlawed theatre not because actors are liars, but because he has a devious plan to rebuild the disorganized Southside in the image of the orderly Northside. A flood is coming which actors, wearing masks, may prevent through the use of magical incantations. Without actors to protect the Southside, that section of the city will be destroyed and the Mayor may then rebuild. The Mayor reveals he has several actors who will protect the Northside, including Rowan. Rowan has had his heart surgically removed so that he is merely a puppet, doing only what he is told to do. Rownie is devastated.

Rownie escapes with Rowan to the Clock Tower just as the floods begin. Rownie puts an enchanted mask designed to be the River on Rowan, who then himself becomes the River. Rownie begs his brother not to let the River flood the city. Rowan leaps into the River, causing it to calm down at once. Rownie is elated that the city has been saved, but is saddened once more to have lost his brother again. Rownie then returns to live with Thomas and the goblins and to learn the art of theater.

More summaries and resources for teaching or studying Goblin Secrets.