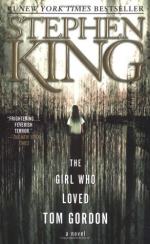 Stephen King
This Study Guide consists of approximately 69 pages of chapter summaries, quotes, character analysis, themes, and more - everything you need to sharpen your knowledge of The Girl Who Loved Tom Gordon.

This detailed literature summary also contains Related Titles and a Free Quiz on The Girl Who Loved Tom Gordon by Stephen King.

The Girl Who Loved Tom Gordon tells the story of nine-year-old Trisha McFarland, whose Saturday afternoon outing with her mother and brother turns into an eight day nightmare when Trisha gets lost in the woods. Still reeling from the fallout of her parents' divorce, Trisha has begun to feel invisible whenever she is around her mother, Quilla, and her brother, Pete. Quilla and Pete have been arguing continuously since Quilla moved the children away from their former home and schoolmates after the divorce. As the novel opens, Trisha finds herself ignored, as usual, by her mom and brother, who argue so intensely as they walk along the hiking trail that they don't even notice Trisha. They don't hear her ask for a drink of waternor do they hear her tell them she needs to go to the bathroom. Irritated and hurt, Trisha decides to teach them a bit of a lesson by stepping off the trail to do her business without telling them. She gladly pictures the look of worry on their faces when they turn to notice that she is not there.

But her childish plan to scare them a little turns into a true disaster when Trisha realizes she has wandered too far off the trail, and cannot find her way back. Before her mom and Pete even notice that she is gone, Trisha has wandered several miles away from safety in her desperate quest to find the trail again. As darkness begins to fall over the New England woods, Trisha accepts that she is thoroughly lost, and must rely on her own resources for survival.

But Trisha is not completely alone. Her active imagination, helped along by the fever she contracts in response to her prolonged exposure, conjures up the friendly image of her hero and heartthrob, Red Sox pitcher Tom Gordon. Tom Gordon is an excellent role model for a girl lost in the woods, because the quality both Trisha and her father, Larry, admire most about Tom is that he has ice water in his veins. Always cool under pressure, Tom Gordon possesses another quality which helps Trisha through her ordeal: faith in God, which Gordon expresses after each win by pointing an index finger up at the sky.

With the faith of Tom Gordon to aid her through her darkest hours, Trisha learns that she, too, has ice water in her veins. The little girl summons the courage and faith she needs to survive loneliness, hunger, and the threat posed by an unknown creature which stalks her through the forest. In the end, Trisha saves herself, and perhaps even her family, with whom she is ultimately reunited. The crisis brings her family closer together, and Trisha learns that no matter what curve balls life may throw at her, she is capable of standing up to them.