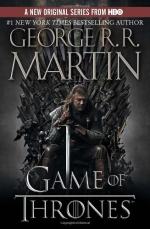 George R. R. Martin
This Study Guide consists of approximately 64 pages of chapter summaries, quotes, character analysis, themes, and more - everything you need to sharpen your knowledge of A Game of Thrones.

A Game of Thrones Summary & Study Guide includes comprehensive information and analysis to help you understand the book. This study guide contains the following sections:

This detailed literature summary also contains Topics for Discussion and a Free Quiz on A Game of Thrones by George R. R. Martin.

A Game of Thrones is set in medieval times with a knights-and-ladies sort of kingdom, and a wider, exotic world around it. This world, where seasons last for years, is ineptly ruled and a struggle for power is about to erupt. Over the sea, the heir of the previous dynasty, Viserys Targaryen, is struggling to win back his crown by marrying his sister Daenerys off to a powerful nomad chieftain. In the north the Starks are reluctantly drawn into a web of politics and plots. Further north, the ubiquitous otherworldly forces of evil are gathering. As the story expands, the subplots branch out and intertwine with increasing complexity, and the reader is drawn deeper and deeper into the tale. Martin's story is intricate, gripping and original, but his greatest strengths are his memorable characters and a rich, assured writing style.

Eddard Stark, Lord of Winterfell and the North, is on the way home from the execution of a man of the Night's Watch who betrayed his vows and fled from the Wall. His sons Robb and Bran, his illegitimate son Jon Snow, and his ward Theon Greyjoy all attend. On the road, Robb finds a dead direwolf killed by the antlers of a stag, which gave birth to five pups before it died. Robb and his brothers ask to keep them and Eddard consents. Unexpectedly, Jon finds a sixth pup lying separately nearby, an albino runt with white fur and red eyes. Jon claims this one for himself.

A short time later King Robert Baratheon travels to Winterfell with his court and many retainers, including his wife, Queen Cersei of House Lannister, and their children. The Queen's twin brother, Ser Jaime Lannister of the Kingsguard, and their younger brother Tyrion also accompany the group. Robert, who grew up as a foster brother to Eddard, asks Eddard to become the new Hand of the King after the death of the previous office holder, Lord Jon Arryn. Eddard reluctantly agrees, despite hearing a rumor that the Queen's family had Jon Arryn killed. Eddard leaves to take his post with his daughters, leaving his wife behind to care for one of their children who was injured after witnessing Jaime and Queen Cersei participating in inappropriate behavior.

Jon Snow elects to travel north to the Wall to join the Night's Watch. Tyrion, eager to see the fabled construction for himself, accompanies Jon. At the Wall Jon finds the Watch is beset with problems. A new King-beyond-the-Wall has arisen in the northern lands to rally the wildlings to his banner. This man, Mance Rayder, was once a brother of the Watch before fleeing to join the wildlings. Jon also learns the Watch is grievously under strength, mustering barely a thousand men to cover the three hundred miles of the Wall, and its manpower is now made up of murderers and criminals who chose the Wall over execution or imprisonment.

After Eddard leaves for the south, an attempt is made on Bran's life. Catelyn realizes that Bran must have seen something, his injuries were inflicted deliberately, and the would-be murderers are trying to cover their tracks. Caitlyn learns the assassin is Tyrion Lannister. Traveling north, Catelyn and her party encounter Tyrion by chance in an inn and take him captive to the Eyrie, where he is placed on trial. Tyrion chooses trial by battle and his champion, Bronn, wins freedom for him.

During training for the Night's Watch, Jon and many of the other young men are bullied by the master-at-arms, Alliser Thorne, but Jon concocts a plan for them to stand up to him. Through this experience Jon wins the friendship of Samwell Tarly, and Maester Aemon. Jon is eventually promoted to the status of full brother of the Night's Watch, but is dismayed that, instead of being sent to the rangers, he has been made a steward, servant to the Lord Commander of the Watch, Jeor Mormont. Sam points out this is not an insult. Instead, the Commander is going to keep Jon close, as fathers keep their heirs nearby. Jon is being groomed for command.

In the capital at King's Landing, Eddard investigates Jon Arryn's death and learns Jon Arryn and King Robert's brother, Lord Stannis Baratheon, discovered that King Robert's three children were actually the products of an incestuous liaison between Queen Cersei and her twin brother Jaime. Rather than arrest the Queen for her indiscretions, Eddard instead offers Cersei the chance to flee. Before this can happen, King Robert dies while hunting and Cersei's eldest son Joffrey is proclaimed King before Eddard can pass the crown to Stannis, Robert's true heir. When Eddard tries to right this wrong, he is accused of treason. Eddard reluctantly agrees to sign a confession in return for his daughters' lives and the chance to go into exile on the Wall. Instead, Joffrey has Eddard executed.

After the death of King Robert, a civil war erupts. Robb Stark leads an army of northmen into the Riverlands to support Lord Hoster Tully, whose forces came under attack by Lord Tywin Lannister after Catelyn takes Tyrion prisoner. Riverrun, the Tully stronghold, is besieged by an army under Jaime Lannister, while another large Lannister army sits south of the River Trident to prevent Robb's advance. Unexpectedly, Robb wins the support of House Frey, allowing him to detach his cavalry and cross the Green Fork while his infantry carries on to the Trident. Tywin, joined by the liberated Tyrion, defeats the Stark footmen before learning Robb has outmaneuvered him. Shortly afterwards, Robb's forces surprise and capture Jaime Lannister before smashing the Lannister army at the Whispering Wood outside Riverrun. Tywin falls back on the strong castle of Harrenhal and orders Tyrion to go to King's Landing and help Joffrey. Lord Renly Baratheon is declared King of Westeros, becoming the second of the war's five kings. Robb Stark becomes the third, when he is proclaimed the King in the North.

While Jon and Sam say their vows just beyond the Wall, Jon's dog, Ghost, returns with evidence that the bodies of two of Benjen Stark's men are nearby. The bodies are carried back to Castle Black, where they come back to life and attack the Commander's Tower, including Mormont. Jon succeeds in killing them by burning them. Shaken, Mormont resolves to lead the Watch beyond the Wall in strength to test Mance Rayder's strength. Although news of his father's death causes Jon to doubt his calling, he decides his place is with the Watch. Mormont takes this time to pass down the Valyrian-steel sword of House Mormont, Longclaw, to Jon.

In the Free City of Pentos, Magister Illyrio Mopatis and the exiled Prince Viserys Targaryen conspire to sell Viserys' thirteen-year-old sister Daenerys in marriage to Khal Drogo of the Dothraki. Drogo commands a clan of forty thousand mounted warriors whom Viserys plans to use to reclaim his homeland. Unexpectedly, Daenerys and Drogo find love as they journey east into the vast grasslands of the Dothraki Sea, and Daenerys becomes pregnant with a son. Viserys becomes angry about how long he must wait before Drogo decides to invade Westeros and, in a drunken rage, insults Drogo grievously. Drogo decides to crown him right there—with molten gold. Daenerys picks up her brother's quest to reclaim the Iron Throne, but Drogo remains reluctant. The tables turn when a Westerosi assassin nearly kills Daenerys and their unborn child; a furious Drogo agrees to invade Westeros.

During a raid on the peaceful Lhazareen, Drogo takes a wound which becomes infected. Drogo dies and soon after Daenerys loses her unborn son to the sorcery of a Lhazareen witch. Daenerys has the witch burned in a pyre. While the witch is being burned she places the eggs in the fire. Incredibly, the eggs hatch, and Daenerys Targaryen, the Stormborn, becomes mother to the first three dragons seen in the world for one hundred and sixty years.

More summaries and resources for teaching or studying A Game of Thrones.

A Game of Thrones from BookRags. (c)2022 BookRags, Inc. All rights reserved.