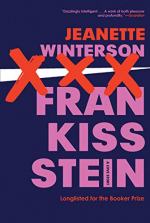 Jeanette Winterson
This Study Guide consists of approximately 69 pages of chapter summaries, quotes, character analysis, themes, and more - everything you need to sharpen your knowledge of Frankissstein.

This detailed literature summary also contains Quotes and a Free Quiz on Frankissstein by Jeanette Winterson.

The following version of this book was used to create the guide: Winterson, Jeanette. Frankissstein. Grove Atlantic, 2019.

Jeanette Winterson’s contemporary Gothic retelling of the novel Frankenstein has 27 unnumbered chapters and two major plotlines: One set in the 19th century and another in the present-day. In the 19th century potion of the novel, Mary Shelley narrates the writing and publishing of Frankenstein and the events that surrounded it. Mary Shelley struggles with the death of her children at young ages, her husband Percy Shelley’s affairs and the sexism of the time. Mary Shelley begins writing Frankenstein in 1816 at a lakeside retreat where she is staying with Percy Shelley, Claire Clairmont, her stepsister, Lord Byron, the famous poet, and his doctor. Winterson shows how historical events and concerns of the time deeply influenced the novel, including the protests of the Luddites in England, a demonstration of galvanism the Shelleys observed and others. Byron gets Claire pregnant and then takes the child and dumps her in a convent. After Frankenstein is published, people attribute it to Percy Shelley, unable to believe a young woman wrote the novel. When Mary Shelley gets a letter from the head of Bedlam Insane Asylum about a man claiming to be her character Victor Frankenstein, she travels to the asylum and meets the man. Dr. Wakefield, the head of Bedlam Asylum, tells the story of how Arctic Explorer Captain Walton found Frankenstein out on the ice searching for his creation and brought the crazed man to Bedlam. Frankenstein begs Mary Shelley to unmake him, but she cannot. Frankenstein disappears from the hospital and shows up later in the novel and appears to be following Mary Shelley.

The present-day story is narrated by a young transgender doctor named Ry Shelley. Ry falls in love with Victor Stein, a charismatic proponent of artificial intelligence. Stein, who wishes to be liberated from the body, continually marvels over Ry’s comfort in their body. Stein believes artificial intelligence will solve humanity’s ills, but Ry remains skeptical. Ry meets several people who are connected o Stein, including sexbot king Ron Lord, Claire, a Jesus freak who falls in love with Ron Lord, and Polly D., a Vanity Fair journalist investigating Victor Stein. All the while, Ry experiences discrimination and misunderstanding because of their transgender status. Stein take Ry to his secret lab underneath the streets of Manchester where he is performing experiments on dismembered body parts Ry supplies him. Stein begs Ry to retrieve a head for him from Alcor Life Extension Foundation, a storage facility in Arizona for cryopreserved human remains. Ry reluctantly agrees to get the head and, while in Arizona, a drunk man at a roadside bar rapes them. At the end of the novel, Stein tries to scan and revive the cryopreserved brain of his mentor, Dr. Jack Good. Just before the experiment, he tells Ry he loves them and Ry wonders if Stein is saying goodbye. The experiment causes a blackout in the city and, afterward, Stein disappears. Polly D. and Ry return to the fallout shelters under the streets of Manchester where Stein built his lab, but find no trace of him except a signet ring.

More summaries and resources for teaching or studying Frankissstein.