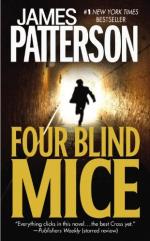 James Patterson
This Study Guide consists of approximately 52 pages of chapter summaries, quotes, character analysis, themes, and more - everything you need to sharpen your knowledge of Four Blind Mice.

This detailed literature summary also contains Topics for Discussion and a Free Quiz on Four Blind Mice: A Novel by James Patterson.

Alex Cross is retiring from the Washington police department and Nana and his three children are looking forward to seeing him a lot more often. He is almost finished when his best friend John Sampson arrives, asking for his help. John's friend Ellis Cooper has been charged and convicted of murdering three young women and John is convinced he is innocent. With only a short time before his execution, John and Alex travel to West Point in an effort to secure a stay of execution and eventually his freedom, but are met with roadblocks at every turn.

The army seems reluctant to even look at the evidence mounting that suggest Ellis's innocence. The deeper Alex and John dig, the stranger the story becomes. With ties that link back all the way to Vietnam, they uncover many similar murders where in each case the man charged and convicted has proclaimed his innocence right up until his execution. In each case, calling cards are left behind in subtle places, and the bodies are painted red, white or blue. The deeper they investigate, the more dangerous it becomes, until Alex finds himself under fire outside his own home, and later is almost killed by the very men who are responsible for the entire affair. For a while, it looks as though the killings have been orchestrated from inside the supermax prison where Kyle Craig is housed. The former FBI agent that Alex helped to arrest enjoys playing games, but while the killings have links to the prison, it is not Kyle Craig who is responsible. Despite that, he takes the opportunity to threaten the safety of Alex and his family.

The killings turn out to be revenge for the murders of Tran Van Luu's family in Vietnam - a crime committed by US Special Forces soldiers known as the Three Blind Mice, and covered up by ranks as high as General. Trained as assassins for the Army, the Three Blind Mice are good at what they do, and have learned to enjoy their work. Now, they are not only killers for hire, but kill for amusement when the contracts are executed. Hired by Tran Van Luu because he is unable to get justice via legal channels, they are the very men who killed his family, and now are asked to hunt down and kill all those responsible for the cover up. They are never told the identity of the man who hires them or the reasons for the execution of the men they are killing, but to these men it doesn't matter. When the Three Blind Mice are killed in a shoot out with Alex and John, Tran enlists the services of his former gang the Ghost Shadows to finish the job. In an exciting finish, Alex comes close to losing his life, but finds he appreciates it even more and the investigation not only leads him to a new career with the FBI, but also leads John to find the love of his life, Billie Houston and marry her. When Alex catches the garter, he fearlessly faces Jamilla, knowing deep down they are destined to spend more time together as well.

More summaries and resources for teaching or studying Four Blind Mice: A Novel.