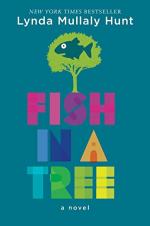 Related Topics
Shouting at the Rain

Lynda Mullaly Hunt
This Study Guide consists of approximately 59 pages of chapter summaries, quotes, character analysis, themes, and more - everything you need to sharpen your knowledge of Fish in a Tree.

Fish in a Tree Summary & Study Guide includes comprehensive information and analysis to help you understand the book. This study guide contains the following sections:

This detailed literature summary also contains Quotes and a Free Quiz on Fish in a Tree by Lynda Mullaly Hunt.

The following version of this book was used to create this study guide: Mullaly, Lynda. Fish in a Tree. Penguin Random House, 2015. The novel is written in first-person, present tense narration, drawing the reader more fully into the experiences and story of protagonist Ally Nickerson.

The narrative begins with Ally describing a series of situations in which she feels uncomfortable as a result of not being able to read, of being bullied, and of feeling very alone, in spite of the best efforts of her supportive mother and protective big brother. Things begin to change for her, however, with the arrival of a new teacher – Mr. Daniels, whose friendly approach to all his students, not just Ally, begins to trigger changes for all of them.

As Mr. Daniels gives Ally and her classmates increasingly interesting assignments, she begins to develop friendships with outspoken Keisha (who has dreams of becoming a baker) and highly intelligent Albert (who seems to know a lot about just about everything and who frequently comes to school with bruises). As Ally becomes more and more comfortable with her new friends, she learns that Albert’s bruises come from being bullied by other kids and from choosing to not fight back. He does not believe in violence. Meanwhile, all three students are picked on by rich girl Shay and her friend Jessica, but while Ally takes Shay’s nasty comments to heart, Keisha and Albert seem to not mind at all, something that inspires Ally to become less sensitive to Shay as well.

Meanwhile, Ally is also inspired by Mr. Daniels who, as Ally becomes less wary of him, eventually convinces her to take some tests to find out what her difficulties with reading actually are. Eventually, Ally is diagnosed with dyslexia, and Mr. Daniels starts working with her to develop some techniques to help her read more easily. He refers, during one of their conversations, to a saying that suggests that everyone is unique, and therefore special, in their own ways. This, along with more successes in class, inspires Ally to work even harder. As she begins to improve, she becomes increasingly aware that her much loved big brother has similar problems and offers to pass on some of what she is learning. He, however, refuses.

As time passes, Ally starts spending more and more time at school with Mr. Daniels. Her friendships with Keisha and Albert deepen. Shay becomes increasingly nasty, particularly when Ally wins the election for class president. Meanwhile, Albert finally stands up for himself – or rather, for Keisha and Ally, who are attacked by the same bullies who have been attacking him. His courageous actions lead Ally and Keisha to become even gladder of his friendship.

After working hard on extra projects for Mr. Daniels, Ally is given the title “Student of the Month." Shortly afterwards, when Travis comes to pick her up after school, she realizes she is able to help him in the same way as Mr. Daniels has helped her. She arranges for Mr. Daniels and Travis to meet, and after their conversation, they agree that Travis can start working with Mr. Daniels on the same techniques that have helped Ally. Afterwards, Ally happily realizes how much things have changed for her and her big brother: the impossible is becoming possible.

More summaries and resources for teaching or studying Fish in a Tree.

Fish in a Tree from BookRags. (c)2022 BookRags, Inc. All rights reserved.