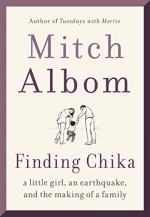 The following version of the memoir was used to create this study guide: Albom, Mitch. Finding Chika. Harper, November 5, 2019. Kindle.

In Mitch Albom's memoir, Finding Chika, Albom describes the seven lessons that he learned while Medjerda “Chika” Jeune lived with him and his wife, Janine, while Chika was fighting a fatal brain tumor. Albom writes that the most important lesson he learned was that people do not have to be related by birth or marriage to be family. He says that the family consisting of him, Chika, and Janine came together “like eggs being scrambled” (235). He realizes that he could not have loved Chika any more if she had been his biological child.

Chika was already facing a hard life when she was born in the poverty-ridden country of Haiti. Three days after her birth, an earthquake devastated the country. Chika and her mother were not hurt. However, the house where they were sleeping broke apart, and the roof fell off. They spent the next several nights sleeping in the sugarcane fields. Two years later, Chika’s mother died in childbirth. Chika, then three, went to live with her godmother for a short while until her godmother realized she was not able to take care of Chika in the way she needed to be. She took Chika to the Have Faith Haiti Orphanage.

Albom, meanwhile, began doing volunteer work in Haiti after he met. John Hearn Jr., a man associated with the Have Faith Haiti Orphanage. Albom chartered a plant to Haiti just after the earthquake to go with Hearn to check on the orphanage and the children living there. Albom returned to Haiti multiple times to help rebuild. When Hearn admitted that he no longer had the money to run the orphanage, Albom stepped in as director.

Albom believes that God set Chika and Albom on the same path so that they would meet. Albom was the one who talked to Chika’s godmother when she surrendered Chika to the orphanage. Chika had lived there for two years when Alain Charles, the Haitian director of the orphanage, contacted Albom with the news that Chika’s face was drooping and she was having trouble walking. An MRI in Haiti revealed a mass on her brain that doctors there said they could do nothing about. Hoping he could save Chika’s life, Albom had Chika flown to America for treatment. While Chika was in America, Albom and his wife took care of her.

The prognosis on Chika’s tumor was originally fairly positive. When the neurosurgeon tried to remove the tumor, however, he was able to take only about ten percent of it out because it was so entangled with Chika’s brain. He told Albom that Chika’s tumor was a grade four tumor, much more serious than they had originally thought. It was a diffuse intrinsic pontine glioma, or DIPG. Its long-term survival rate was zero. The doctor advised Albom to take Chika back to the orphanage and let her live out the rest of her life there until the tumor began to affect her abilities. Because Albom was aware of how hard Chika’s life had already been, he could not just let her die without fighting the tumor. He and Janine dedicated themselves to finding a cure for Chika’s tumor.

Albom tells his reader from the beginning of the memoir that Chika died when she was seven years old. He writes the story of how he, Janine, and Chika became a family as Chika underwent various treatments. It is Chika’s ghost who encourages Albom to write her story, to list the things that he learned from her, and to explain the meaning of these lessons. Chika tells Albom that if he writes down the things she taught him, she will be able to stay with him forever. During Chika’s last visit to Albom as a ghost, Chika tells Albom that she will always be alive in his heart.