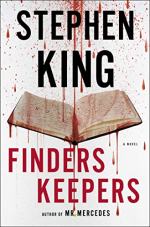 NOTE: All citations in this Study Guide refer to the Kindle version of Finders Keepers, published June 2, 2015.

The human mind can become obsessed with anything, even literature, the reader learns in the novel Finders Keepers by Stephen King. This novel tells the story of Morris Bellamy who murders the famous author John Rothstein and steals the work Rothstein has produced since his retirement from writing. Bill Hodges, a retired police detective, is called in to help Pete Saubers, the boy who found the trunk in which Morris hid the notebooks he stole from the famed author. Pete’s life, along with that of his sister, is in danger because Morris will stop at nothing to get back what he believes belongs to him.

The timeline for the novel begins in 1978 when Morris and two friends broke into Rothstein’s home. Morris confronted Rothstein about the direction in which the third Jimmy Gold novel took that character before Morris shot and killed Rothstein. Morris and his friends stole the money from Rothstein’s safe as well as more than 100 Moleskine notebooks that the writer had filled after his retirement. Fearing his friends would ruin his scheme, Morris killed them. He was not interested in the money but desperately wanted to read Rothstein’s latest work, hoping to find some hint of salvation for Jimmy Gold.

Back in his hometown Morris met with Andrew Halliday, an old friend who ran a business buying and selling collectible books. Andrew was appalled that Morris was bringing the notebooks to him especially since news had already broken of the author’s death. Morris took Andrew’s advice and buried the books and money in an old trunk beneath a tree near his home. Morris was angry because Andrew denied he had encouraged Morris to steal the notebooks and decided to visit a bar. At the bar Morris got drunk and later raped a woman. He was arrested and sentenced to life in prison. He never got a chance to retrieve the money or notebooks.

Thirty-one years later Pete Saubers’ father, Tom, was among those injured when Brady Hartsfield drove a Mercedes into a crowd of people waiting for a job fair. Pete’s family was already struggling financially. His injury made matters worse. Pete and his sister were distressed because their parents spent so much time arguing. One day while Pete walked along a creek behind his house, he noticed a hole revealed in the ground under a tree when a piece of thawing bank fell away. He explored the hole and found the trunk Morris had hidden there. Rothstein’s money and notebooks were still inside. Wanting to help his parents, Pete began sending them a monthly allowance of $500 through the mail. They had no idea from whom the money was coming but accepted it and began to dig their way out of their financial hole.

After several years the money ran out. By that time Pete was in high school and had been introduced to the author Rothstein. He recognized the writing in the notebooks as Rothstein’s. After reading the notebooks he realized he had the manuscripts for two additional novels in the famous Jimmy Gold series. He believed these novels were Rothstein’s best work. Because his sister wanted to go to a private high school, one that his parents could not afford even though they were doing better financially, Pete decided to try to sell some of the notebooks to fund his sister’s schooling. Meanwhile, Morris had been released from jail on parole and was headed back to his hometown. He had spent more than thirty years dreaming about and obsessing about what Rothstein’s notebooks might hold.

At this point the novel switches to present tense. Tina Saubers, Pete’s sister, and her friend Barbara Robinson go to Bill Hodges, who works as a bounty hunter, for help because Tina fears her brother is involved in something illegal. Hodges and his team from Mr. Mercedes, the first novel in this trilogy, put their heads together and save Pete and his sister from Morris who is determined to get the notebooks at any price.