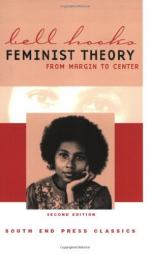 Bell hooks
This Study Guide consists of approximately 29 pages of chapter summaries, quotes, character analysis, themes, and more - everything you need to sharpen your knowledge of Feminist Theory from Margin to Center.

This detailed literature summary also contains Topics for Discussion and a Free Quiz on Feminist Theory from Margin to Center by Bell hooks.

This in-depth exploration of what the author believes to be essential principles of feminism was first published in 1984, with a second (unrevised) edition published in the year 2000. Throughout the book the author explores various manifestations of her central contentions - that early feminist theory and practice was limited in scope, that true feminist movement has the potential to vastly improve the lives of men and women alike, and that more than ever feminist movement is simultaneously necessary and provocative - not to mention necessarily provocative.

The book begins with two prefaces, one to the first edition (published in 1984) and one to the second (published unrevised in 2000). In the first preface, the author gives her reasons for writing the book - a lack of awareness in the feminist movement of the perspective of African-American culture and society. In the second preface, the author comments on the (sometimes intensely) negative reaction the first edition received, particularly from white women. She also describes how reactions to the book and its ideas have since become more positive and accepting, and how the need for both feminism and a broader perspective on it is more apparent than ever.

The first chapter defines the author's perspective on contemporary feminism - how it initially developed without input from and/or consideration of the non-white, non-middle class experience. The second and third chapters examine how it has been increasingly difficult to determine a universally acceptable definition of what feminism is and what it's striving to achieve, suggesting that feminism's ultimate goals (the elimination of sexist oppression) can and will benefit men and women of all ages.

Chapters 4 and 5 contrast the experiences of women and men as they relate to feminist theory and movement, with Chapter 4 focusing on the way such movement has been undermined by sexism-driven competitiveness, imperialism-driven power struggles, and capitalism-driven prejudices. Chapter 5, meanwhile, explores the sometimes paradoxical nature of feminist's movement perspectives on men - that they are they enemy, that they are allies, that they are to be universally avoided, that they are in many ways as victimized by sexism as women.

Chapters 6 through 11 explore specific ways that the exploration, development and application of feminist theory apply in contemporary life. Re-defining the value of power, offering broader education to more women, ending gender-oriented violence, evolving new approaches to parenting, and exploring the boundaries of sexuality are all, in the author's perspective, important purposes of expanding and acting upon feminist theory.

Chapter 12 sums up the value of all that the book has discussed by suggesting that transformation is a process that takes more time than early feminists seem to have been willing to give it. The author suggests that everyone - men, women, conservative, liberal, academic thinker, emotional responder - have all, in one way or another and to varying degrees, lived according to the exploitative rules of a capitalist, imperialist, sexist society. She contends that only by first accepting that situation and working to change the belief systems that gave rise to the rules can true, universally beneficial feminist movement take place, take root, and take charge.

More summaries and resources for teaching or studying Feminist Theory from Margin to Center.