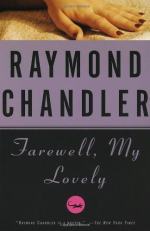 Raymond Chandler
This Study Guide consists of approximately 56 pages of chapter summaries, quotes, character analysis, themes, and more - everything you need to sharpen your knowledge of Farewell, My Lovely.

This detailed literature summary also contains Topics for Discussion and a Free Quiz on Farewell, My Lovely by Raymond Chandler.

Farewell, My Lovely is the story of private detective Philip Marlowe. The novel follows Marlowe's movements in and around Bay City, a fictional town in California not far from Los Angeles. Marlowe, a former investigator for the District Attorney's office, is a loner whose business is slow at the moment. Early in the narrative, Moose Malloy kills Mr. Sam Montgomery, current owner of Florian's night club. Philip Marlowe happens to be in the next room. Moose, who has been looking for his old girlfriend Velma, escapes and Marlowe agrees to help the police bring him to justice. Marlowe then goes poking around Jessie Florian's place. Jessie's deceased husband Mike owned Florian's when the neighborhood was predominantly white.

Later, Marlowe accompanies Lindsay Marriott to a money-for-jewelry exchange after Marriott's lady friend's jade necklace is stolen. Subsequently, Marriott is killed and the money disappears. Moments after Marriott is murdered, Marlowe meets Anne Riordan. Marlowe is not in the habit of trusting people, but he trusts Anne. They find three marijuana cigarettes In Lindsay Marriott's jacket pocket along with several of Jules Amthor's business cards. Amthor, self-identified psychic and dangerous man with something to hide, claims ignorance where Lindsay Marriott is concerned. However, Marlowe is beaten, drugged, and thrown into a small sanitarium which doubles as a hideout for criminals. As he escapes the sanitarium, Marlowe sees Malloy lounging in one of the rooms. Anne learns that the seductive Mrs.Grayle owns the stolen jade piece. When she and Marlowe meet, the characters experience an immediate attraction. Marlowe begins to believe that Marriott was in the business of blackmailing lonely, wealthy women. He also begins to suspect that a famous casino boat owner, Laird Brunette, may be involved with the fake sanitarium and hot-boy safe house.

As both investigations unfold, Marlowe's life and personality come into plainer view. He is a tough-talker and more intelligent than most people give him credit for. He has a great many friends on the police force, some of them help grudgingly, others are invaluable to Marlowe. He also enjoys the company of an exciting woman. In Farewell, My Lovely, Marlowe meets two very different women who prove to be equally interesting and attractive to him. Anne Riordan is the Irish girl next door. She is young, fresh, full of ideas and sometimes too impetuous for her own good. Anne has a good heart and a just-pretty-enough face. On the other hand, Mrs. Grayle smolders. Her blond hair and ample figure hold Marlowe's attention a little too well. Mrs. Grayle is a woman with a secret, however, which makes her a liability. At the end of the day, though, Marlowe likes his life the way it is: sparse and edgy with few emotional attachments. Marlowe also likes his liquor, medicinal and otherwise.

More summaries and resources for teaching or studying Farewell, My Lovely.

Farewell, My Lovely from Gale. ©2005-2006 Thomson Gale, a part of the Thomson Corporation. All rights reserved.