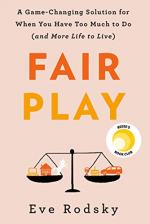 Eve Rodsky was, like many wives and mothers, solely responsible for the majority of the work necessary to keep their home running and taking care of their children. Her husband, Seth, was willing to step in sometimes when she gave him specific tasks, but he felt no responsibility for any of the jobs and often argued when Eve asked for help. That prompted Eve to come up with the idea for the Fair Play method. The “game” consists of 100 cards that describe the tasks and duties it takes to run a home and take care of children. The ultimate goal is for the husband to take on some of the responsibilities by understanding that specific tasks are his sole responsibility, from beginning to end. There are several important rules for implementing the method, and Eve goes through each, including the need to communicate and to make time for self-care.

The cards are divided into categories that identify various aspects of life, from who packs or makes lunch to who is responsible for paying the mortgage. There are also cards making someone responsible for things such as sending out thank-you cards and hosting parties. The first step in the process is for the couple to consider each card individually and decide whether this holds value for their family. For example, one couple decided that sending out holiday cards did not have value, and they eliminated that from their list. The next step is to divide the cards that remain, keeping in mind that cards can be dealt again as needed. The goal is to share the duties rather than making one person be perpetually responsible for picking up the children at daycare or tidying the living room. Eve warns against potential pitfalls, such as issuing random commands without context or trying to retain complete control over how a task is completed.

Each player is required to hold a card that gives them time for self-care (daily grooming), maintaining friendships, and the Unicorn Space. The Unicorn Space is the time and opportunity to pursue a passion that can then be shared with the world. It could be playing an instrument, running in marathons, or golf. Eve warns against not taking the time allotted for the Unicorn Space or choosing something that is not a passion.

At the end of implementing the method, the parents should be true partners, and the mom should feel that her husband is providing support for the home and family. After conducting all the research for this book, Eve's son had begun to learn the terms and to see the importance of sharing responsibilities and of following a passion. Eve's husband held a fair share (which is different than half) of the cards, making him a collaborator in their home and family. Eve considered those things signs that the method works.