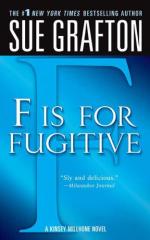 Sue Grafton
This Study Guide consists of approximately 43 pages of chapter summaries, quotes, character analysis, themes, and more - everything you need to sharpen your knowledge of 'F' Is for Fugitive.

'F' Is for Fugitive: A Kinsey Millhone Mystery Summary & Study Guide includes comprehensive information and analysis to help you understand the book. This study guide contains the following sections:

This detailed literature summary also contains Topics for Discussion and a Free Quiz on 'F' Is for Fugitive: A Kinsey Millhone Mystery by Sue Grafton.

F is for Fugitive is the sixth in Sue Grafton's alphabet series starring private investigator Kinsey Millhone. In this novel, Kinsey is hired by a dying man to prove his son is innocent of the murder he pleaded guilty to seventeen years before. Kinsey travels to the small town of Floral Beach to investigate the murder, quickly discovering that there are as many suspects as there are men in town. As Kinsey continues her investigation, she learns things about family and herself that she never would have discovered without the help of the dysfunctional Fowler family. F is for Fugitive is another great detective story that will entertain even those reader's new to the alphabet series.

Royce Fowler and his daughter, Ann, visit Kinsey Millhone in her newly-rebuilt offices with a case that, on the surface, appears to have been solved seventeen years ago. Bailey Fowler, Royce's son, pleaded guilty to the murder of his ex-girlfriend, Jean Timberlake, and was sentenced to six years in prison. Before he had served a year, Bailey escaped and has been a fugitive ever since. Last month, Bailey was found when he was erroneously arrested in a case of mistaken identity. Now Bailey faces his original six years and up to another two years for the escape charge. Royce does not believe his son is guilty and wants Kinsey to prove it. To add to the pressure, Royce is dying of cancer and wants Kinsey to prove his son innocent before he dies.

Kinsey takes the case and immediately travels to Floral Beach. Kinsey is to stay at the Ocean Street Motel, a business owned by the Fowler family. Her first night there, Kinsey meets Ori Fowler, a woman who has suffered diabetes all her life and has, as a result, become a narcissistic hypochondriac. As a result of her parents' ailments, Ann has had to quit her job to care for them and the hotel. Kinsey can see the strain on Ann and finds herself grateful to be an orphan.

Kinsey begins her investigation by visiting Bailey's new lawyer, where she learns that Bailey took a plea deal to avoid a longer sentence, but that he claimed innocence all along. Kinsey also learns that Jean was pregnant at the time of her death, but Bailey says it was not his. From there, Kinsey goes to the high school Jean attended and collects a list of names of her school mates. Kinsey then talks to the principal, Dwight Shales, but Shales refuses to give her any information until he can speak to the school's lawyer. Finally, Kinsey visits Bailey in jail. Bailey is of little help because he is deeply depressed by his current circumstances. Bailey does tell Kinsey, however, that Jean was searching for her birth father's identity at the time of her death.

That night, Kinsey goes to a local bar and meets Tap Granger, Bailey's old friend and partner in crime. Tap tells Kinsey about some of the crimes he and Bailey committed together, including the fact that at the time of her death, Jean was holding more than forty thousand dollars for them, but that the money never surfaced. It sounds like a motive for murder to Kinsey, but Tap does not believe it is. Then Tap leaves without saying goodbye. Kinsey sees him the next day when he comes into the courthouse in a mask and carrying a gun, intent on freeing Bailey. Bailey escapes, but Tap is killed on his way out of the courthouse. When Kinsey returns to the bar that afternoon, she learns that Tap got a phone call before he left the night before. Kinsey wonders if that person got Tap to help Bailey escape.

Kinsey speaks to Shana Timberlake, Jean's mother, and learns that she never knew Jean was looking for her father and never saw any reason to tell her who he was. Kinsey speaks with several other people and learns about Jean's promiscuity. Soon Kinsey finds herself wondering if Jean was killed by the married man she was rumored to be seeing. While mulling over all she has learned, Kinsey has dinner with Dwight Shales, learning about his wife's fight with multiple sclerosis and his friendship with Shana Timberlake. At the end of the meal, Ann arrives at the restaurant and seems annoyed to find Kinsey eating with her old boss.

A short time later, Kinsey returns to the high school where Dwight Shales gives her Jean's file. In the file, Kinsey learns that Ann, one of the school counselors, had several meetings with Jean. When Kinsey asks Ann about this, Ann says it was mostly in regard to Jean's frequent absences. Using the information from her school records, Kinsey goes to the courthouse and gets a copy of Jean's birth certificate. On the certificate, Kinsey learns that the local doctor and owner of the Eucalyptus Mineral Springs delivered the baby. Kinsey goes to speak to him and has a run in with his wife. That night, Kinsey is attempting to sleep at the hotel and gets a threatening phone call, this on top of having discovered that someone broke into her room the night before. Suddenly Kinsey is finding it very difficult to get any sleep.

Kinsey has returned to Shana's home several times to speak to her and has been unable to find her at home. Kinsey finds a card in Shana's trash arranging a meeting somewhere called the Sanctuary. First Kinsey assumes the meeting place is the church, but then realizes it must be at the spa. Kinsey returns to speak with Dr. Dunne, confirming her impression that Dunne is Jean's father. Dunne swears, however, that Shana never showed up for their meeting. That night, Kinsey returns under cover of darkness and finds Shana's body. Before Kinsey can leave and call the police, Dunne's wife finds her. Dunne's wife attempts to force Kinsey to stay at gunpoint, but Kinsey is able to get the better of her and run away.

Kinsey makes her way toward town and finds herself on the cliff above the apartment where Jean and her mother lived before Jean's death. There are stairs leading up to a private home where Kinsey finds herself standing. Kinsey can see Dwight Shales through the windows and decides to seek his help. Dwight allows Kinsey inside. Kinsey asks Dwight about the stairs and by his answer, realizes he was the married man with whom Jean was having an affair. Dwight admits it, but swears he was not the father of the baby and that he did not kill Jean. Kinsey believes him. As they talk, Ann calls, angry and demanding Kinsey return to the motel.

Something about Ann's behavior makes Kinsey begin to wonder who would benefit from Ori's death more than Ann. Ori died of an allergic reaction that most people in town blamed on Bailey. Kinsey thinks otherwise. Kinsey returns to the hotel and sneaks into Ann's room. There Kinsey finds salt rock like that used in Tap's gun as well as statements for an investment in exactly the same amount that Bailey and Tap entrusted to Jean. Unknown to Kinsey, Ann has been sitting in bed watching her search the room. Ann points a gun at Kinsey and tells her she will kill her and claim trespass. First, however, Ann confesses to all the murders, claiming she killed Jean to protect Dwight and killed Shana to keep her away from Dwight. Ann is planning to kill Kinsey for the same reason, but her father interrupts. During the ensuing struggle over the gun, Ann is shot in the foot. Ann is subsequently arrested and charged with the murders of Ori Fowler and Shana Timberlake.

More summaries and resources for teaching or studying 'F' Is for Fugitive: A Kinsey Millhone Mystery.

'F' Is for Fugitive: A Kinsey Millhone Mystery from BookRags. (c)2022 BookRags, Inc. All rights reserved.